This article explains the Mintzberg’s Organizational Configurations in a practical way. After reading it, you will understand the basics of this powerful change management and behaviour tool.

What are Mintzberg’s Organizational Configurations?

Henry Mintzberg bases his organisational structure and design on the ‘fly’; a model that visually resembles the head and eyes of a fly. Every organisation consists of six components; the strategic apex (top management), middle line (middle management), operating core (executive level), support staff (staff organisations that play a supporting role), technostructure (technological support of an organisation) and the ideology that characterises an organisation’s culture.

The so-called ‘working base’ refers to the operational level on which employees on the work floor carry out their tasks. They are supported by the hierarchical level that comes next; the middle management. This is the tactical level and forms the various departments of an organisation. These in turn are managed by a smaller group that is the top management. This is the strategic level of the organisation and is formed by the board members.

On the one hand, middle management is supported by technicians who form the managing ‘techno structure’. This also includes IT specialists, quality control, production planning and such. On the other hand, they are also supported by ‘support’. This concerns facility matters and staff departments, such as advice from human resources and support in the field of communication and marketing.

Henry Mintzberg uses the term ideology to refer to the organisation’s culture that is formed by standards, values and traditions. These are an important building block for the successful operation of organisations.

According to Mintzberg, each organisational structure is based on the ‘fly’. All five of the previously mentioned components are connected to the environment that is placed around the ‘fly’ like a circle. 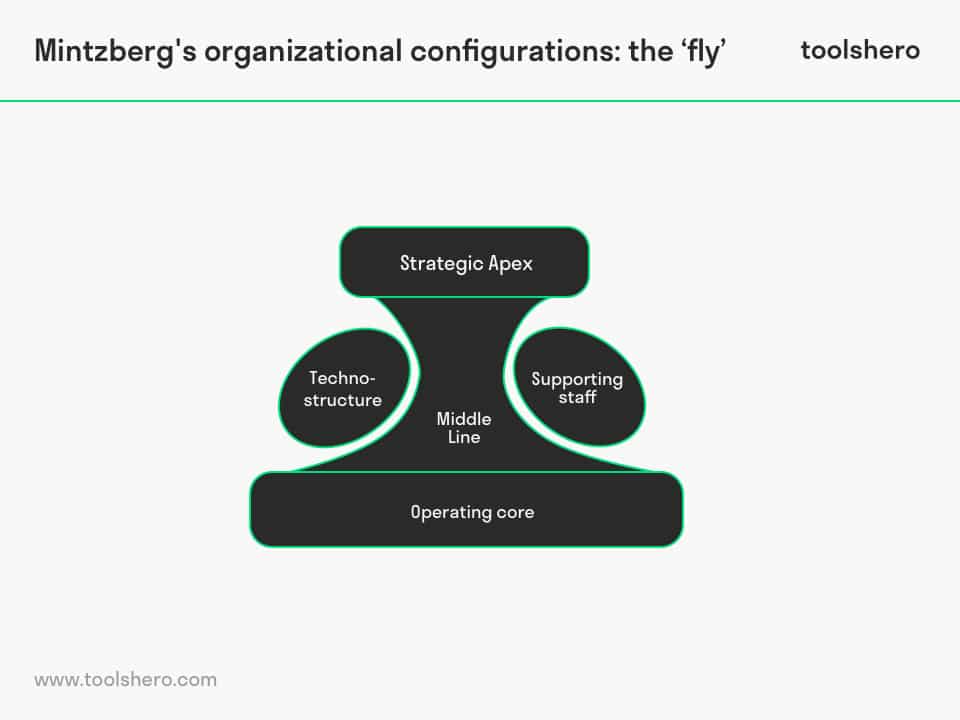 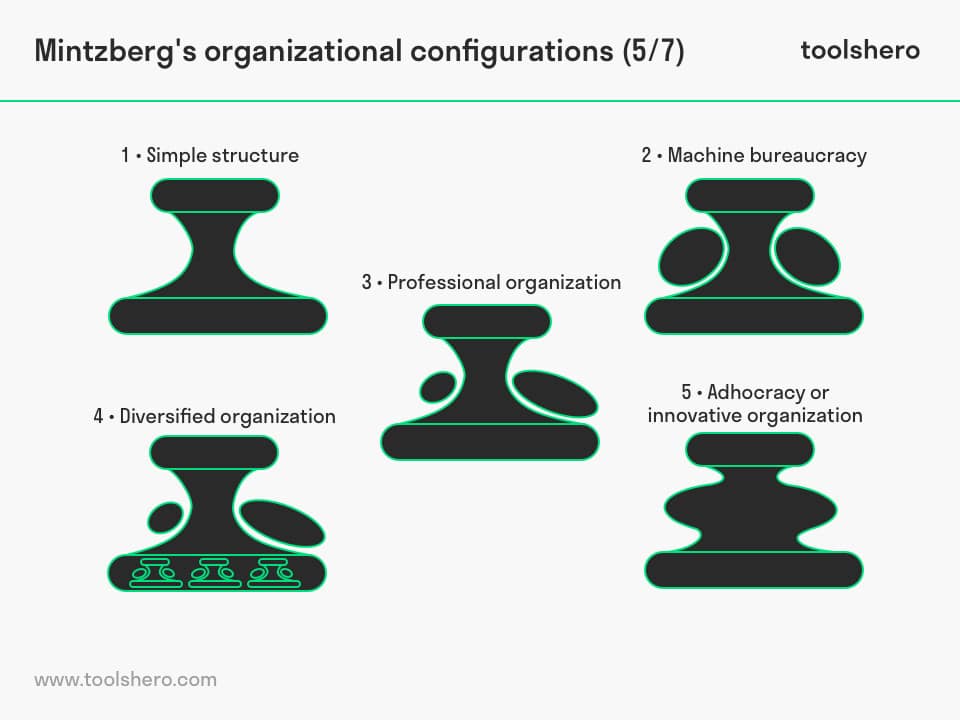 This Organizational Configuration is also referred to as the entrepreneurial organisation and is characterised by a flat structure and a heavy strategic top. This leads to direct supervision/ regulation of all work processes. There is no middle management. In many cases, this involves a starting business, in which the director has a hands-on mentality and wishes to have control over all processes. There is no formal structure (yet) and the standardised systems are missing. An entrepreneurial organisation is flexible and will professionalise over time, which shows in the configuration. Departments will arise and middle management with it.

This Organizational Configuration is characterised by enormous standardisation of work processes. There is a heavy middle management and the focus lies on the technical structure. Due to the standardisation, this is also termed ‘bureaucracy’. Everyone within this organisation works according to procedures and work processes are recorded, analysed and checked.

This often leads to specialisation as departments operate separately from each other and in doing so may develop opposing interests.

In addition to large organisations that work according to legislation, such as ministries and municipal governments, production companies also often work in machine bureaucracy. This has everything to do with the standardised output that’s delivered. Think of delivering passports and driving licenses, for instance, and staplers produced by production companies that must all be identical.

Just like in bureaucracy, this configuration is characterised by many guidelines and procedures, but the employees are highly independent. The professional organisation employs many highly educated people and, as a result, the focus lies on the operational core. The end result might differ per professional; they are personally responsible for the result. However, the input is standardised. In most cases, these are organisations in the free professions such as law firms, notaries, consultancy firms, accountancy firms and universities. There is a high level of efficiency, but little control of the work. Consequently, professional organisations are difficult to change.

This concerns a decentralised structure, where each division has its own board. As a result, differences of opinion might arise between the divisions regarding the strategic course of the organisation. Due to the opposite interests between the divisions, it might be difficult to implement unambiguous changes.

The adhocracy is also termed an innovative organisation and is characterised by little fixed structure. Work is often done on a project basis with multi-disciplinary professionals. The focus lies on the supporting staff departments. Additionally, the adhocracy has characteristics from the first four configurations. Due to the innovative character, this organisation must be able to adapt, and sometimes strict measures are taken to achieve the desired end result.

An organisation such as TNO is a typical project-based adhocracy, but the pharmaceutical branch and consultancy firms also frequently have such this configuration.

The mission organisation, or missionary organisation. They have a mission and convey this mission to all their target groups and stakeholders. The mission organisation produces based on an ideology; their entire company culture is infused with these ideas. The focus lies on the ideology that exists around the ‘fly’. This means that there is a hierarchy with top management (board), middle management and operational work floor, managed by technological support and staff departments. Apple is such an organisation that has grown by embracing the ideology of its founder Steve Jobs. Additionally, this type of company is also characterised by in-house production.

According to Mintzberg, this organisation is particularly power-oriented. As a result, this configuration doesn’t use an organisational structure, but it says a lot about the (corporate) culture. In organisations where politics are dominant, there is often no other coordinating system. Politics are coordinating, but that means a real structure is lacking and it’s unclear who is responsible for what. In the Netherlands, we can give a literal example from the political world; the leaderships of the various political parties. The organisational structure isn’t always clear and the organisations float on what’s important at the time in the political lobby and the debates in the House of Representatives. Political organisations are about power. Those who possess the most power, are in charge and control the organisation from that position.

Add a link to this page on your website:
<a href=”https://www.toolshero.com/change-management/mintzberg-organizational-configurations/”>ToolsHero: Henry Mintzberg Organizational Configurations</a>