This article describes the Axen Rose by Ferdinand Cuvelier in a practical way. After reading you will understand the definition and basics of this powerful communication theory.

What is the Axen Rose?

People interact with each other. Interpersonal relationships aren’t always easy to define. Yet Belgian social-psychologist Ferdinand Cuvelier managed to describe these human interactions.

In the 1970s, he developed the Axen Rose, in which he uses the term ‘Ax’ to indicate people’s ability to behave in a particular way in relationships. The model is also referred to as the Relationship Rose and typifies the interaction between people and offers a way to discuss how people interact with each other. Additionally, the theory offers the opportunity to critically look at your own behaviour and allows you to estimate the effects of this behaviour on others.

The City of Axen

The Axen Rose is a method to observe how people behave in communication. The idea is based on the book ‘The City of Axen’, written by Cuvelier. The City of Axen is a metaphor for people and all their different behaviours. It’s about how people cope with things, how they perceive themselves and how they behave towards others. In the metaphorical city, Cuvelier describes six districts that match the six basic Axes. These districts are inhabited by people with certain characteristics that only occur in the district concerned.

The book discusses the journey of protagonist Nand who travels to the City of Axen. Upon arrival in the unknown city, he is embraced by strangers and welcomed with great joy. The city introduces all kinds of aspects of behaviour; in others and in Nand himself. He sees typical behaviour in others; behaviour that is also perceivable in ‘real life’. In the City of Axen, all this behaviour is described in an exaggerated way.

The ten main relationships form the different Axes. These can subsequently be divided into three zones that match the Leary Circumplex. It concerns the Zone of Conflict that provides counter behaviour, the Zone of Removal that creates separation or distancing behaviour, and the Zone of Harmony that creates togetherness.

Fighting and offering resistance belong in the Zone of Conflict. It’s also possible that persons are in retaining or letting go, which will sooner lead to distancing than approaching between both parties. This belongs to Separation. We then speak about the Zone of Removal. 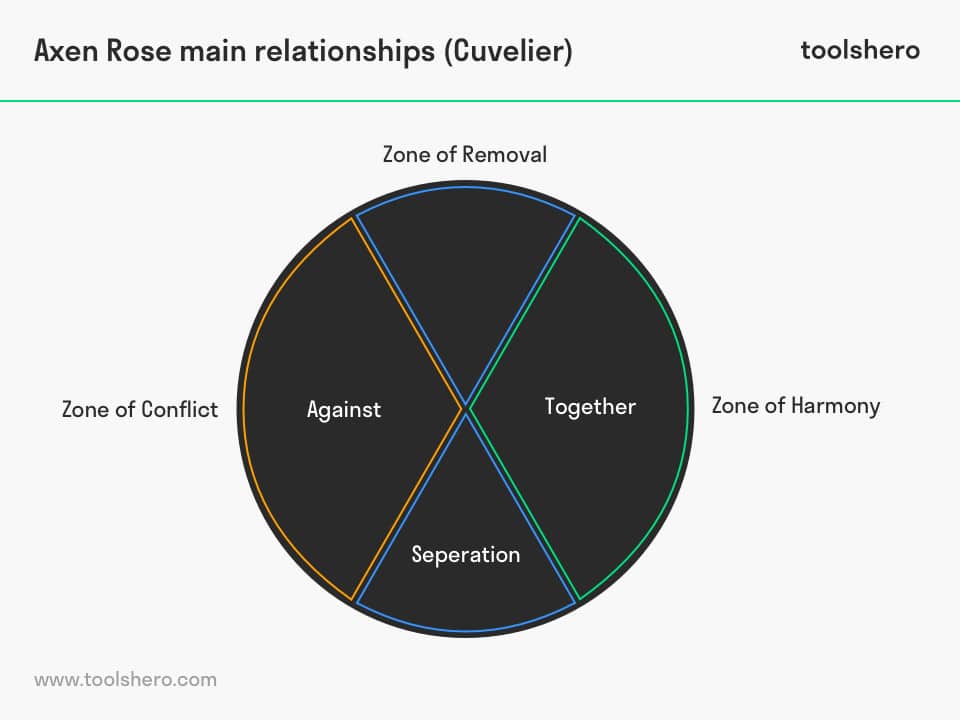 The Axes are used to categorise the countless different behaviours into several main categories. Each Ax indicates a human relating style. All these relating styles are summarised in ten main styles and those are subsequently symbolised by ten totem animals, each with their own specific behavioural characteristics.

Based on years of experience and various different taxonomies, Cuvelier arrived at a categorisation of the interactions that can occur between people. The six basic Axes all have their own district in the City of Axen with their own name and an animal totem.

The animal totems help to distinguish the specific characteristics of the people who feel most comfortable in this district. The six basic districts are situated around a central square:

Each Ax is just as good as any of the others. According to Cuvelier, there is no order to the districts because each behaviour has its own strength.

First, it’s about choosing in which Ax a person belongs and subsequently getting the freedom to behave in accordance with this Ax. The following basic behavioural aspects can be found in the Axen Rose:

This is the lion’s Ax that symbolises giving. This concerns giving in the broadest sense of the word; from offering leadership to giving information and from giving energy to giving opinions.

This concerns both material and immaterial matters; from receiving leadership to information and from receiving warmth or love to trust. The animal totem belonging to this Ax is the dog, who is led by and obeys commands.

Within the Axen Rose this concerns letting go of things, people and ideas. The animal totem of this Ax is the turtle, who acts on his own speed and can withdraw into his own shield.

This concerns letting go of conflicts (you stay out of it) and of impeding ideas and thoughts. Doubt is also part of this Ax.

The animal totem of this A is the (wise) owl who quietly observes and considers everything. This concerns holding onto/withholding information, refusing to share our opinion and secrecy.

This concerns resisting something that is offered. Defending another person or something against someone else. Protecting things, people or ideas and not blindly agree to anything.

The animal totem belonging to this Ax is the ibex; with his bent head with horns, he is ready to offer resistance.

The animal totem of this Ax is the hawk, who can use his sharp beak and claws to tear something up. This is about attacking and combating ideas, but also about fighting injustice.

To clarify the various positions of the Axen Rose, each position connected to an animal totem. In addition to the six basic Axes as described above, ten in total can be distinguished: 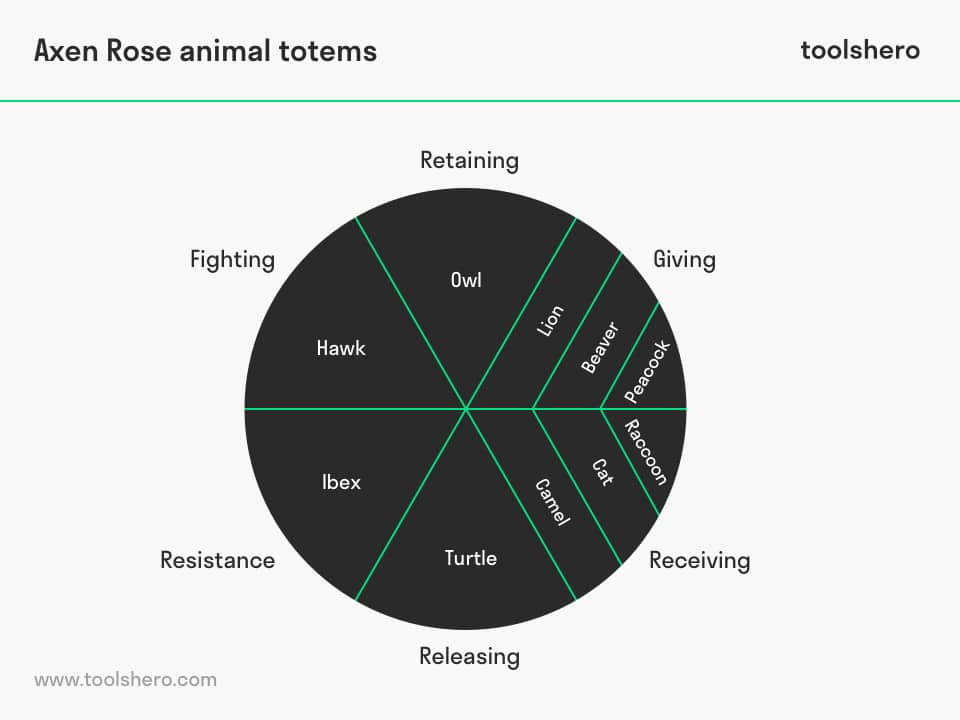 The peacock shows itself and has a presence. It offers itself. It also isn’t afraid to show the less beautiful back of its feathers.

A raccoon prefers to go higher up to be able to observe everything. It symbolises appreciating, respecting and openness to others.

Beavers live in close-knit families and are hard workers. The beaver symbolises caring for and about others.

The king of the animals is happy to take charge, gives information, makes proposals and gives advice.

The camel is a compliant animal, obedient and bears burdens without complaining. It symbolises following guidelines and accepts advice and explanations.

The hawk keeps a close eye on everything from the sky. It symbolises fighting injustice, confronting and criticising.

When someone gets too close, this person risks a firm head butt. The ibex symbolises defying and defending, as well as resisting temptations.

The owl is a wise bird who quietly observes everything. Within the Axen Rose, this symbolises silent observation, keeping secrets and withdrawing.

A turtle can withdraw into its own shield. Making choices is difficult for this symbol. The turtle also symbolises undergoing matters.

Interaction between people is a complicated activity. To gain at least some insight into this, Cuvelier approaches this exchange from three angles:

This is the way in which the interaction occurs and as it’s described in the Axes based on Harmony (together), Conflict (against) and Removal (apart).

This is about what is exchanged. The input can include:

Words, body language such as gestures, posture and facial expressions, intonation play an important role in the interpersonal exchange. This means that a simple word like ‘yes’ can be uttered in a variety of ways, giving it very diverse meanings.

What do you think? What is your experience with the Axen Rose? Do you recognize the practical explanation or do you have more additions? What kind of animal totem are you?

Add a link to this page on your website:
<a href=”https://www.toolshero.com/communication-skills/axen-rose-cuvelier/”>toolshero: Axen Rose</a>