This article explains the Betari Box theory in a practical way. After reading it, you will understand the basics of this useful communication skills tool.

What is the Betari Box theory?

The origin of the Betari Box is unknown. The name is derived from the Persian city of Betari, located in the middle of Iran. Betari is also mentioned in the bible. It’s unknown which link both these have to the Betari Box.

The foundation of the Betari Box pertains to the idea that human behaviour influences one’s own attitudes. One person signals and interprets the behaviour of another and that forms the start of the cycle. After all, people act based on other people’s behaviour; it influences the actions the other takes. This, in turn, influences that person again. The Betari Box provides insight into the attitude and the behaviour regarding each other’s actions, represented in a closed cycle. It teaches people how to gain more insight into their own actions and to improve the ambience at the workplace, for instance. There are often cyclic behavioural patterns at play in work situations. The Betari Box helps us to understand what influence our own attitude and behaviours have on the attitude and behaviour of those around us. Although the idea of the Betari Box is fairly simple, it’s a useful tool when contact with others isn’t smooth or when people find themselves in a negative cycle. 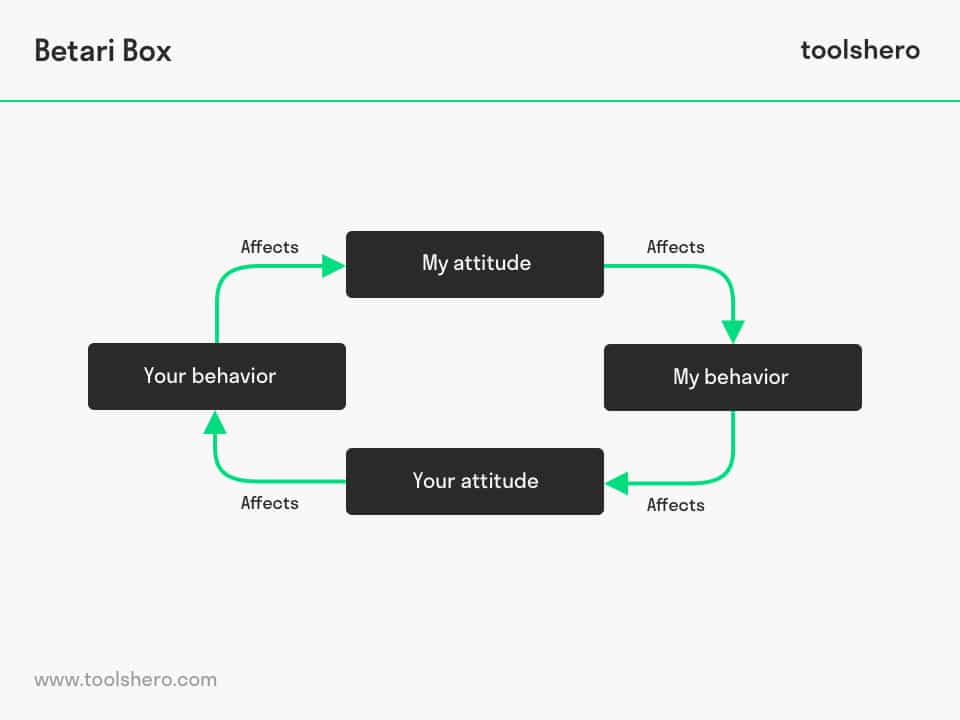 The Betari Box is based on the principle ‘it takes one to know one’. The behaviour you display is often the behaviour you receive from others. Additionally, an individual usually assumes that others will respond in a specific way, which closes him off from different thoughts. This perception fixates his actions.

The example is about the very directive manager Herman. He is naturally mistrusting and doesn’t immediately believe in the competences of his four employees. As a result, he adopts a very controlling attitude towards his employees. He follows their activities hourly, records how long they spend on certain tasks, rebukes them for being away from their work station too long and checks their work and corrects them immediately if he feels it isn’t up to snuff. The result of Herman’s behaviour is that his four employees start to turn against him and distance themselves from him. They no longer make any independent decisions because ‘they never get it right anyway’ nor do they take any more responsibility. This behaviour confirms Herman’s earlier judgement, which causes him to be even more mistrusting towards his employees. The Betari Box cycle is now complete.

The use of the Betari Box is about recognising negative cycles and changing yourself to break through them. Human attitude plays a major role in the behaviour we display. It’s about action-reaction patterns. When people are cheerful and positive, this will positively affect behaviour. These people are kind and pleasant to others, they smile and pay compliments. Subsequently, others will reciprocate with the same behaviour; after all, it’s hard to be unkind to someone so friendly. The reverse is also true. When a person isn’t feeling well, is moody or sad, he is less capable of obscuring this from the rest of the world. In his behaviour, he is short with others, unkind or even unjustly angry towards the people around him. These people, in turn, respond in the same way and will start to avoid this person or confront him. This could give rise to conflicts.

Human attitude shows in our external behaviours. Think of facial expressions, use of voice and intonation, or the use of certain words. This particularly occurs in actions related to other people. Everything we display in our own behaviours affects the attitude of others.

If the Betari Box cycle isn’t broken, there is a serious chance of conflicts arising. Therefore, it’s important to recognise and actively address the process. A highly driven perfectionist often deals with stress he imposes on himself. However, he also imposes it on those around him and becomes impatient when his colleagues haven’t finished their work on time.

Additionally, he’s often dissatisfied with the result they deliver and believes there’s always room for improvement. This negative behaviour and short temper aren’t appreciated by his colleagues. In addition to the fact that it upsets them, they will turn against this person and be grumpy towards him. Perhaps they will adopt a cynical or sarcastic attitude towards him and gossip about him behind his back. The only one who’s able to break through this pattern is the perfectionist himself. He should change his ways and become aware of his own actions and behaviour.

Subsequently, he would do well to speak with his colleagues and admit that he was wrong. Initially, his colleagues will find this strange, but eventually they will appreciate the brave step he has taken. Moreover, this means that it will be easier for all parties to address similar situations in the future.

To change the behaviour of others, it’s important to first look at oneself. First change your own behaviour and attitude, and the behaviour of others will naturally change positively as well. There’s a reason the Betari Box is known as the conflict cycle; it perfectly shows how attitude and behaviour are linked. Effectively resolving conflicts is only possible if people are able to change or adapt their own behaviour, leaving no room for negative thoughts or feelings that influence their actions.

What do you think? Have you ever heard of the Betari Box theory? Do you recognize the practical explanation or do you have more suggestions? What are your success factors for good attitude and behaviour analysis to understand the both and the correlations?