This article provides a practical explanation of the Mary Parker Follett Contribution to Management. After reading, you’ll understand the basics of this powerful management tool.

What is the Mary Parker Follett Contribution to Management?

Management problems, theories, ideas, and models have been around since forever. It’s a topic that has been researched extensively, and one that still has many unanswered questions. Managers are essentially investors. They have a limited supply of resources at their disposal with which they need to achieve the best possible results. This supply of resources ranges from their own time, workers, a budget, or technological instruments. The organisation sets objectives, and managers are given the responsibility to achieve those in the most efficient way possible.

There are a variety of management theories, such as Theory X & Y, or Mintzberg’s Managerial Roles. Some of the people seen as founders of modern management are Henri Fayol with the five functions of management, Frederick Taylor with his scientific management theory, and Elton Mayo.

Another founder of modern management theories is Mary Parker Follett. This American sociologist devoted much of her research period to the question how subordinates, such as civilians and labourers, can agree to decisions that are made for them out of their own free will. Some of the focus areas of the Mary Parker Follett Contribution to Management are conflicts, authority, and leadership.

As indicated, much of the Mary Parker Follett Contribution to Management is about conflicts. It distinguishes between what conflicts are and conflict-solving measures.

Traditionally, conflicts are seen as harmful and useless, but Mary Parker Follett considered conflicts normal processes that arise from having different social norms. She argued that conflicts were not inherently bad or good and should always be approached neutrally and without passion. A conflict isn’t a fight, it’s merely a manifestation of differences between opinions or interests.

Follett emphasised that everyone is different, making conflict unavoidable. Because conflicts cannot be avoided, we should try to benefit from them. They may even be a sign of a healthy environment and progress. On this she said, ‘All polishing is done by friction. We get the music from the violin by friction, and we left the sewage state when we discovered fire through friction.’

In Mary Parker Follett’s Theory, she determined that there are three ways in which conflicts are generally resolved.

Dominance is one party beating another party in a conflict. This is the easiest way to resolve a conflict. However, it’s not a very successful solution in the long term. It also makes other people in the team uncomfortable, and the oppressed will always rebel against the dominance, leading to a loss of focus.

Because there has been no compromise, both sides stick to their viewpoints, which means the conflict can easily arise again.

A compromise is a conflict resolution that involves both parties giving in a little, so the activity that was interrupted by the conflict can resume. Although a compromise is a widely accepted way to resolve a conflict, few people are actually willing to compromise. That’s because they have to give something up.

The focus of conflict resolution in the Mary Parker Follett Contribution to Management lies in the integration of two problems. In this solution, neither of the parties has to give anything up and both their interests are served. Integration leads to something new being started, something that can lead to innovation and to which new values can be added. Integration and collaboration lead to better techniques and a higher level of business intelligence.

According to the Mary Parker Follett Contribution to Management, integration—and therefore permanent solutions to problems—can be achieved using a simple step-by-step plan. 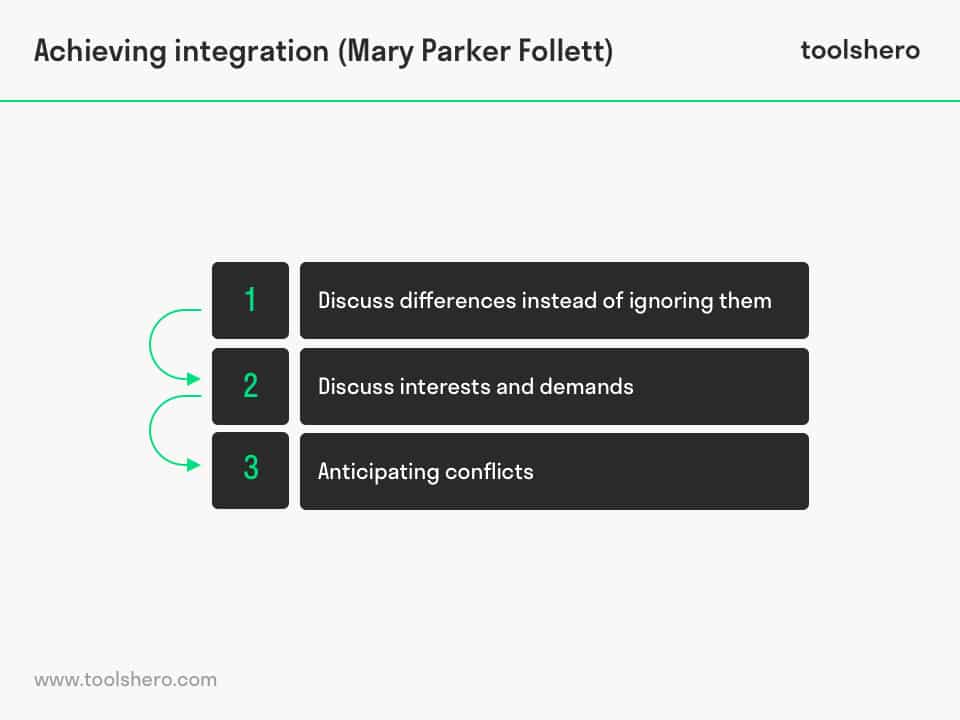 1. Discuss differences instead of ignoring them

On this Mary Parker Follett says, ‘We cannot hope to integrate our differences unless we know what they are.’ It’s therefore important to identify and understand problems and differences. This will reduce the problem, and only important issues will remain. Moments of drama also need to be filtered out. Sometimes, the controversy about a problem leads to people ignoring the cause.

This is a step in which the parties have to address individual interests to achieve integration. Here it’s important that enough personal attention is paid to each other, and that the conversations are meaningful.

Anticipating conflicts is not the same as avoiding conflicts; it’s about the way in which we respond to them. Follett uses the example of a man who likes to ride his motorcycle, even though his wife preferred to walk. He already knew the answer his wife would give when asked if she wanted to go for a ride together.

Follett defined power as the ability to make things happen, to change things. Power is also the ability to produce effects, actions. She distinguished between power-over and power-with. Power-over is a way in which power is established naturally. Power-over is a forced form of power. Power-with is the better type of power because it stimulates development. It promotes better understanding and reduces friction and the likelihood of conflicts.

A significant aspect of management as a profession is giving orders or assigning tasks and delegating administrative matters. According to the Mary Parker Follett Contribution to Management, the following four aspects are important when giving orders.

Managers need to be aware that orders have to consist of actions that can actually be carried out. Concrete matters. Most people give orders without being aware of what they’re actually asking of someone.

After considering concrete matters, the person giving the order has to decide which he will delegate and to whom.

The person giving orders can try out new methods and monitor the results of experiments. It’s important to track the results, and find the reason if an experiment fails.

Following up on results

After analysing the results, the person giving the order can check which methods might be adjusted and in which way if the current methods prove to be ineffective.

According to the Mary Parker Follett Contribution to Management, a leader isn’t necessarily the CEO of an organisation or department head. In her opinion, it’s more the person who keeps an eye on the big picture, the one who facilitates transitions to new situations, and who understands how to shift to those new situations. According to Follett, the leader is also the one who energises the group end who stimulates initiative. The leader is the person who expresses himself in positive and harmonious ways. The leader has the following functions:

Positional leadership refers to the manager taking on an authoritarian attitude that is expected of his position.

Personality leadership refers to a person becoming a leader as a result of it being in his nature, a powerful personality. Compared to positional leaders, born leaders find it even easier to lead.

Functional leadership is a form of leadership in modern organisations. It has to do with the fact that in certain situations, different people can take the lead. The one who is best qualified for a specific action, or the one who has the right knowledge will take the lead in that case.

What do you think? Are you familiar with this explanation of Mary Parker Follett Contribution to Management? Do you see similarities or differences between this management theory and theories from other big contributors to management?

How to cite this article:
Janse, B. (2019). Mary Parker Follett Contribution to Management. Retrieved [insert date] from toolshero: https://www.toolshero.com/management/follett-contribution-to-management/

Add a link to this page on your website:
<a href=”https://www.toolshero.com/management/follett-contribution-to-management/”>toolshero: Mary Parker Follett Contribution to Management</a>