This article provides a practical explanation of the win-lose negotiation. After reading, you’ll have a basic understanding of this powerful management tool.

What is a win-lose negotiation?

Depending on the situation, different models are used. A simple example of a win-lose negotiation is a situation in which a certain quantity of resources must be distributed, resulting in a win-lose situation.

One party wins, whereas the other loses. Unless measures are taken, in a business environment this will often result in a permanently damaged relationship. Although the win-lose negotiation is not the most well-known form of negotiation, it is easily the most common.

With the win-lose negotiation model, individuals will often take on an impossible position in negotiations, such as placing too many demands on the other party, resulting in a bitter dispute.

In this situation, both parties will try to win without taking into account the outcome for the other. Both parties may have entered into negotiations with a desired goal and a certain point at which they will give up in mind.

The win-lose negotiation model is used in negotiations where something is shared or exchanged. Distributive negotiations often feature a scenario in which two or more parties try to share or exchange a fixed number of resources.

Parties will enter negotiations with either the same or different interests. These negotiations will then end up with a winner and loser. The winner gets whatever he/she claimed or more, and the loser gets less or nothing.

The goal is therefore for one party to win as much as possible. Distributive negotiations or the win-lose negotiation models are also widely used in daily life, especially when selling products that do not have a fixed price.

In the Western world, this is often limited to a local market, but in New Delhi for example a large number of products has no fixed priced, allowing plenty of room for negotiation.

Distributive negotiations often take place when limited resources are available. Common situations in which this approach is used include the purchase of a house, a second-hand car, or when asking for a raise.

Negotiation skills can be acquired. Many people have intuitive negotiation strategies, and others are good at learning and implementing effective negotiation techniques. Later in this article, we will focus on the various character traits that are desired in situations in which the win-lose negotiation model is used.

However, we will first address the various steps within a win-lose negotiation. Each of the steps will be explained in detail. 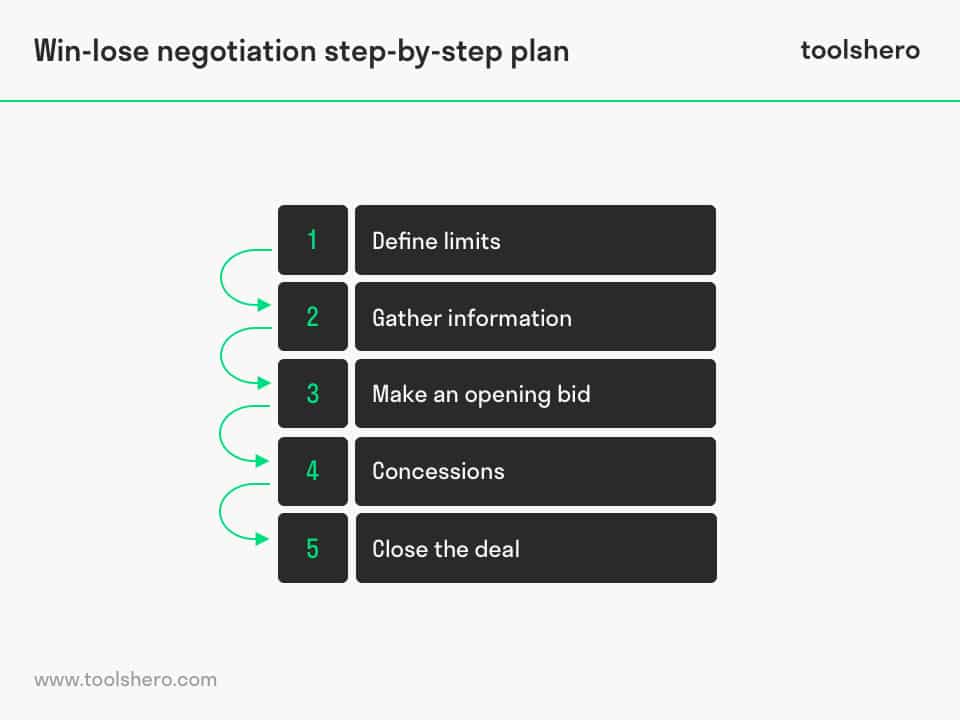 Every party in a negotiating situation must clearly define what he or she wants to leave the negotiating table with. The desired outcome must therefore be closely monitored during the actual negotiations. Points of resistance are those areas in which a party absolutely cannot continue negotiations.

An example is an employee who asks for a raise during an assessment interview. The employee in question has decided his new minimum salary in advance.

For example, the employee negotiating his new salary can use information about his productivity or important results to strengthen his position.

The third step in the win-lose negotiation is making a bid or demand. Commencing this step will set the tone for the rest of the negotiations. The attitude with which the opening bid is made is very important. If the party enjoys a strong competitive position, he can make an excessive opening bid.

The employee knows his worth, and has an amount in mind that he confidently shares with his manager during the interview. In the example of salary negotiations, however, it is not customary to make an excessive opening bid.

As soon the various bids have been made, parties will start to negotiate. Characteristic of the win-lose negotiation model is that one party wins and the other loses. In practice, this means that one party makes an excessive opening bid, and is subsequently unable to counter the other.

The employee shares his vision and the amount to which he believes he is entitled. The employer may then accept or reject this. At the same time, a happy medium may also be found.

There are various tactics for closing a deal. One example is the ‘assume-the-close’ method. In this method, one party pretends that the deal has already been closed, even though this is not yet the case. This is done in the hope that the other party agrees and will stop negotiating.

In addition, a last ‘surprise’ may also be used as bait for closing a deal. This tactic is often used in the win-lose negotiation model. Whereas one party may seem satisfied with the offer, the deal will later turn out to be disappointing.

A skilled negotiator has a number of character traits. In sales and retail in particular, major steps are taken to ensure the effectiveness of negotiation.

Effective negotiators recognise that negotiating can be a complex process, and it’s not just a matter of discussing and sharing conditions. It requires a certain understanding of the dynamics that influence the process. Learning to negotiate well is possible by practising, evaluating, and improving various techniques and strategies.

Patience is a quality that is actually more suited to win-win models of negotiation. Although in a win-lose negotiation people will look to quickly close the deal with as much benefit as possible, patience and tact are often more effective in other negotiation situations.

In the latter situations, negotiators will not rush to reach an agreement. Instead, they will take their time to evaluate different options. After all, the goal is for both parties to benefit.

The American Massachusetts Institute of Technology also describes several qualities that every good negotiator should possess:

How to cite this article:
Janse, B. (2019). Win-lose negotiation. Retrieved [insert date] from toolshero: https://www.toolshero.com/management/win-lose-negotiation/

Add a link to this page on your website:
<a href=”https://www.toolshero.com/management/win-lose-negotiation/”>toolshero: Win-lose negotiation</a>