This article explains the Big Five Personality Test in a practical way. After reading this, you will understand the basics of the different types in this theory of Personality.

What is the Big Five Personality Test?

Personality plays a significant role in psychology. This is shown by the number of studies done on personality types and the number of available personality tests. At the beginning of the twentieth-century, psychologists Gordon Allport and Henry S. Odbert investigated the different personality traits by compiling a list of 4,500 terms from the dictionary describing the character of man. A questionnaire was created based on these terms, which was completed by a large group of people. Statistical techniques were released, based on the answers that were given, to help discover clusters or patterns in different personalities.

Many of these terms could be accommodated in an overarching theme. Lewis Goldberg, a researcher at the Oregon Research Institute, worked on these themes in his theory and called them ‘the Big Five’. The big five indicate the most important personality traits in a personality. The Big Five taxonomy is a generally accepted personality model among contemporary psychologists. It’s currently used, for example, in personnel selection and is a fixed component in many academic record tests. The Big Five Personality Test model, also known as the five factor model (FFM) and Big Five personality traits.

The five domains of the Big Five Personality Test

On the basis of the answers given, a personality type is generated. This personality type contains five domains. Each domain contains a set of attributes of the person in question. Characteristic of the Big Five Personality Test model is that the scores are normally distributed. The characteristics can be very strong to very weak per person. This means, for example, that a person does not have to be extremely introverted nor extremely extroverted, but that a score between these two extremes is also possible. In this example, the person would then be an ambivert. 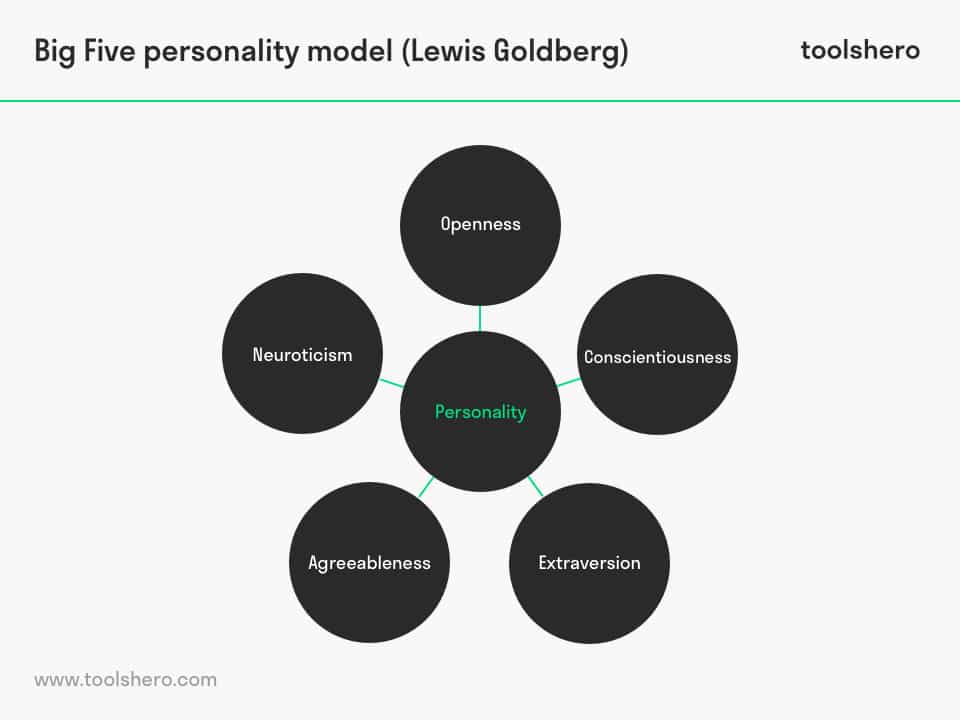 According to the Big Five Personality Test model, a personality consists of five characteristics, to be remembered from the acronym OCEAN:

Openness is the degree to which someone is open to or curious about new experiences. People who score high on this domain can enjoy artistic and cultural experiences. Creativity is therefore an important characteristic within this domain. In daily life, this can mean visiting museums, but also listening to music and travelling to new, unknown destinations. At these new destinations, they will do everything they can to catch a glimpse of these unknown cultures.

People who score lower in this area are risk averse and prefer to avoid uncertainties. They can also become suspicious when someone has an opinion or vision in which they do not recognise themselves. People who are not curious about new experiences are predictable and prefer to stay in their comfort zone. They appreciate routines and traditions.

Openness is often linked to intelligence because people who are open to new experiences often end up in an environment where they gain new knowledge. This phenomenon is also called intellectual curiosity.

This dimension of personality shows how conscious a person is of his/her actions and the consequences that go with them. This includes: conscientiousness, diligence, dutifulness, responsibility, reliability and self-discipline.

People who score low on this scale show less motivated behaviour than people who score high on this trait. People who are less conscientious often handle chaos better and don’t work in a structured fashion. These characteristics ensure that they are less punctual than their high-scoring fellow man. Their carefree lifestyle sometimes cause them to make impulsive decisions.

Those who score high on this scale are often organised and reliable. As far as their visions for life is concerned, they are determined and ambitious. They set high goals for themselves and are motivated enough to achieve them. Conscientious people are good at time management and are focused on achieving successes.

Extroverts like to meet new people and do not shy away from introducing themselves to strangers. They are described as energetic, social and friendly and prefer to be surrounded by a large group of people. Extroverts are sometimes perceived as dominant by introverts, and it seems as if they are constantly looking for attention.

Introverts are reserved and are often experienced as shy or subdued. They often exhibit completely opposite observable behaviour in comparison with extroverts and derive energy from their experience. Introverts talk less than extroverted people and feel intimidated in large groups. They like to stay in smaller groups of people, preferably acquaintances. Despite the fact that introverts have a smaller social network than extroverts, they often have a close group of good friends.

Altruism is a way of life or belief in which a person’s behaviour is determined by other’s needs. When someone helps someone without self-interest, this person is unselfish and altruistic.

Individuals who score high on this scale are experienced as friendly and helpful, but also as naïve and willing. The danger of these characteristics is that they can easily be misused. They trust others and are willing to help where ever they can. For this reason they often perform well in a team, cooperation is their top priority. So it’s not surprising that these people do not like conflicts and confrontations. They feel like they’re doing their job when mediating needs to be performed and they like to please their loved ones.

A lower score in this area does not immediately mean that the person is always perceived as being unpleasant, but s/he is more often told that s/he is pedantic or competitive. That they are less helpful or accommodating is because they distrust the intentions of others. People who score lower are more often seen as egotistical and selfish.

Neuroticism is the degree to which a person is sensitive and nervous, or self-assured and carefree. This trait shows how quickly someone shows feelings of fear, anger or vulnerability or how emotionally stable someone is. The degree of positivity in a person can also be derived from the scores of this domain.

Neurotic people, those who score high on this trait, often feel irritable and restless. This can be expressed, for example, in an explosive emotional outburst after hearing bad news. A characteristic for this group of people is that they often worry about small things. That’s because they think too much about their problems and often make them bigger than they are.

The people who score lower on this scale are emotionally more stable. They are less concerned about general things and often have a positive self-image. These people are able to calmly anticipate stressful situations and see their problems as they are.

Recruiters have been using the Big Five Personality test for years to determine whether a candidate is suitable for the position for which they’ve applied or if they fit in the company’s vision, but the method is also used for training or coaching people. It gives a relatively reliable first impression of the candidates, but no two people are the same. Even when they share the same personality type, they can differ materially from each other and have different strengths and weaknesses. The creation of a number of subject-specific traits, linked to the five domains, can then help to provide more clarity on the extent to which the job fits the candidate.

Which job best suits a person depends on his or her personality type. In a cooperative, busy environment, an extrovert person will feel at home more quickly than an introverted type. An introvert will appreciate a workplace where the contact is less personal. Getting the freedom to work on their own ideas helps an introvert to get more out of themselves. In general, the third characteristic, accuracy, best indicates whether someone will perform well at work.

What is your personality type? What are your strengths and weaknesses? After completing this test, you will receive a personality profile that is translated into competencies which you can develop.
More information

Add a link to this page on your website:
<a href=”https://www.toolshero.com/psychology/big-five-personality-test/”>ToolsHero: Big Five Personality Test</a>