This article gives a practical explanation of the cognitive dissonance theory by Leon Festinger. After reading, you’ll understand the basics of this powerful psychology tool.

What is the cognitive dissonance theory?

Who proposed the cognitive dissonance theory?

It was Leon Festinger who proposed the concept of cognitive dissonance in his 1957 book, ‘A Theory of Cognitive Dissonance’. In this book he posited that all people strive toward internal psychological consistency to be able to function well mentally in the real world. A person experiencing cognitive dissonance becomes uncomfortable and is always focused and motivated to resolve this dissonance. He or she does so by justifying stressful behaviour or by avoiding certain circumstances and contradictory beliefs.

What is the main element from the cognitive dissonance theory?

The main element from the cognitive dissonance theory is about two factors that affect the intensity of the dissonance. This is about the number of dissonant beliefs a person has, and the importance that is assigned to each belief/value. There are a number of ways to eliminate dissonance.

Why some cognitive dissonance might not be a bad thing

Dissonance isn’t always a bad thing in a person’s development. Recognising situations in which beliefs and behaviours contradict each other can help to discover underlying values and understand better what you stand for. That’s the explanation given clinical assistant professor Paraskevi Noulas. Dr Curry states that, ‘Working on the cognitive dissonance in your life can be a positive and eye-opening, life-changing experience.’ ‘It can allow a person to grow in terms of control over one’s self and help you to become more confident in yourself and your decision making.’

In what ways can cognitive dissonance be resolved? 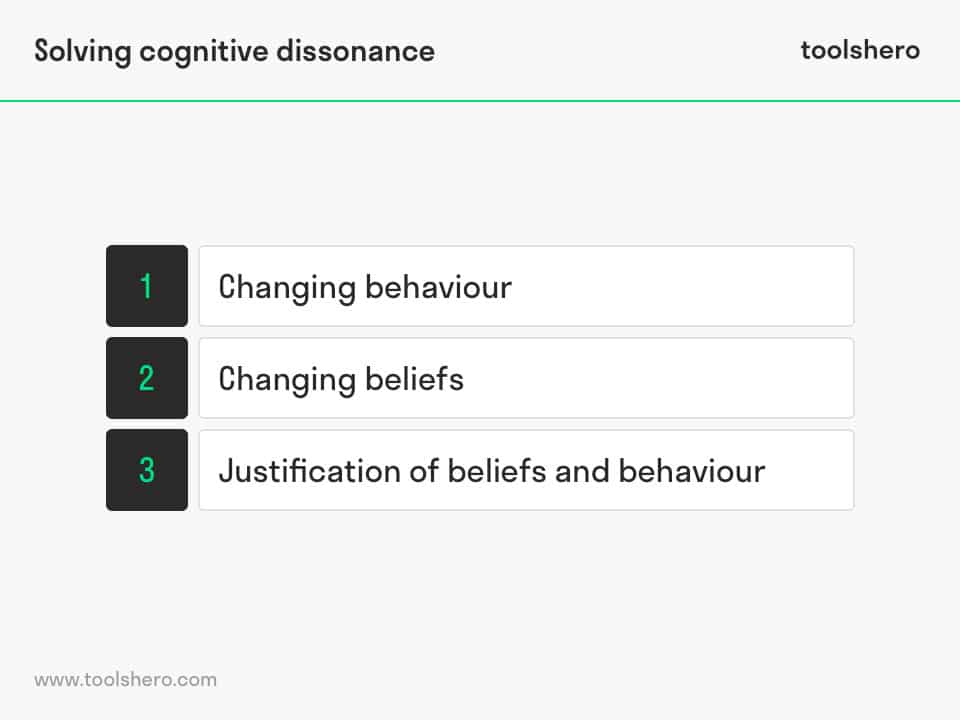 The first way to reduce cognitive dissonance is to change dissonant behaviour. A person who drinks excessively can choose to not drink, or call a cab after a few drinks. Changing both behaviours will relieve the cognitive dissonance because their actions are then in harmony with what they know about the dangers of drinking and driving.

This method of dissonance reduction is often problematic and difficult to implement in practice. That’s because it’s difficult for people to change learned behavioural responses. Another example of this is quitting smoking. Everyone knows the dangers of smoking, and despite us being aware of the possible consequences, some are not able to align their behaviour to reality by giving up smoking.

People’s beliefs are constantly being adjusted to relieve dissonance. In other words, the human brain is always filtering conflicting matters to support certain beliefs. In the example of the smoker, that person can look at research and believe that smoking doesn’t necessarily cause cancer. That way they experience less dissonance when they continue their unhealthy behaviour.

3. Justification of beliefs and behaviour

A good example of this is a person who spends all the money they earn. They can convince themselves that spending your money is fine, as you can’t take it with you after you die. Any person displaying regular risky behaviour can justify it by claiming that you have to live every day like it might be your last. These are all attempts to rationalise risky behaviour and reduce cognitive dissonance.

Every person has a different level of tolerance for cognitive dissonance, so it’s hard to measure it objectively. Most people experience cognitive dissonance as discomfort, comparing it to a nagging sense that something isn’t right. At the same time, it doesn’t lead to an insurmountable problem in your life. Eventually most people will feel the need to change something to change the nagging discomfort.

The spectrum of cognitive dissonance is one of extremes. On the extreme end of it, it can manifest as anxiety. This mainly happens when it’s a long-held belief, such a religious beliefs or morals that conflict with behaviour or feelings. People who grew up in a conservative religion believe premarital sex is a sin. If it then happens anyway, it can lead to cognitive dissonance. The same happens for same-sex couples. This type of cognitive dissonance isn’t as prevalent these days, fortunately. The imbalance can lead to serious worry and feelings of fear, shame, or anger. If the dissonance is particularly large, people will feel they’re immoral, or might develop a lack of self-esteem until balance is restored.

Applications of the cognitive dissonance theory

The cognitive dissonance theory is used in many ways in everyday modern life. We go into some of the applications below.

Cognitive dissonance has been made a part of different models for basic learning processes in students. The goal is to improve the self-awareness of students regarding psychological conflicts in their beliefs, ideals, and values. This requires that students learn to defend their personal beliefs. After that the students learn to look at new facts and information objectively in order to reduce the psychological stress caused by the conflict between their beliefs and reality. Studies have shown that psychological interventions that cause cognitive dissonance with the goal to implement deliberate change can improve students’ learning skills.

The cognitive dissonance theory is also used to stimulate positive social behaviour. One example of this is encouraging the use of prophylactics in different parts of the world. Other actions based on cognitive dissonance are campaigns against littering, against racism, and against traffic violations. The theory can also be used to explain why people give to charities.

Researcher Hank Rothgerber stated that people who eat meat may experience internal conflict between their eating habits and their love for animals. This dissonance occurs when someone’s behaviour as meat eater conflicts with a belief, value, or attitude. The person in question can do a number of things, including avoidance or wilful ignorance to prevent that this type of cognitive dissonance occurs. In order to resolve the dissonance, the person will anthropomorphise animals less, refuse to accept the responsibility for eating meat, or adopt the belief that meat is healthy based on studies they have consulted.

Summary of the cognitive dissonance theory

In psychology cognitive dissonance is a form of psychological stress that is experienced when a person holds two or more conflicting beliefs, behaviours, or values. According to the cognitive dissonance theory, all people tend to want to find consistency in their cognitions. If there are inconsistencies between, for example, beliefs and behaviour, then one of the two will have to be changed to relieve the discomfort. The phrase cognitive dissonance was proposed by Leon Festinger, who presented the theory behind it in his 1957 book, ‘A Theory of Cognitive Dissonance’.

In order to resolve the discomfort that occurs as a result of cognitive dissonance, people will consciously or unconsciously use one of three ways. The first is to adjust certain beliefs so they no longer conflict with behaviour. The second is to adjust certain behaviours, so they no longer conflict a person’s beliefs. Finally, justifying certain actions or behaviours can be used to resolve cognitive dissonance.

The cognitive dissonance theory is also an important part of education that people should receive during their development. The goal is to improve students’ self-awareness. By teaching students how they have to objectively look at new facts and information, the psychological stress of their beliefs conflicting with their behaviour or reality can be reduced, and vice versa. The process of cognitive dissonance also happens in psychotherapy and in attempts to affect positive social change, such as the use of prophylactics and combatting racism.

What do you think? Do you recognise the explanation about the cognitive dissonance theory? Do you experience psychological stress – or have you experienced it – and do you now understand better where it comes from? If you look back on your development, would you say you’ve experienced cognitive dissonance? Do you recognise this process of self-awareness in the people around you? Do you have any tips or additional comments?

How to cite this article:
Janse, B. (2020). Cognitive Dissonance Theory. Retrieved [insert date] from toolshero: https://www.toolshero.com/psychology/cognitive-dissonance-theory/

Add a link to this page on your website:
<a href=”https://www.toolshero.com/psychology/cognitive-dissonance-theory/”>toolshero: Cognitive Dissonance Theory</a>