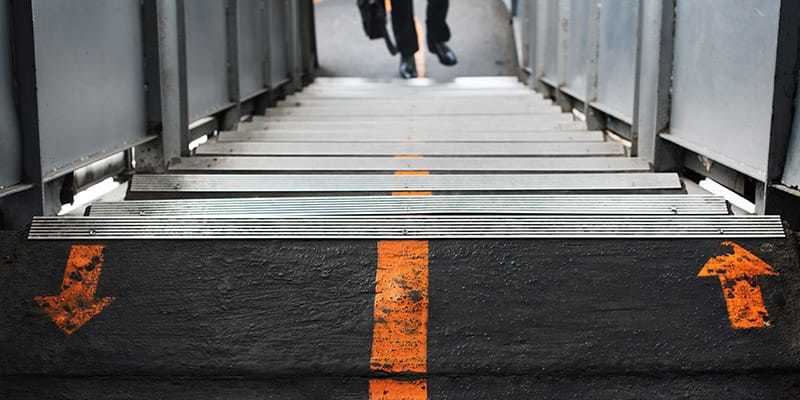 This article provides a practical explanation of the Nudge Theory. After reading, you’ll have a better insight into this behavioural psychology concept on how you can better understand how people think, make decisions, and act.

What is the Nudge Theory?

The Nudge Theory is a flexible and modern concept in behavioural sciences to understand how people think, make decisions, and behave. The concept helps people to improve their thinking and decisions, manage all kinds of changes, and identify and change existing influences.

The Nudge Theory is also different from education, legislation, and enforcement – other ways to achieve compliance. The concept of the nudge was introduced by the 2008 book: “Nudge: Improving Decisions About Health, Wealth and Happiness“. The book was written by two American scientists of the University of Chicago: economist Richard Thaler and legal scholar Cass Sunstein. The Nudge Theory also gained popularity among American and British politicians, in the private sector, and public health. There are also nudge units operating internationally, such as the World Bank, the UN, and the European Commission.

The first definition of the term ‘nudge’ was developed in cybernetics by James Wilk before 1995 and described by D.J. Stewart from Brunel University as ‘the art of the nudge’, also referred to as ‘micronudges’.

One of the most familiar examples of the Nudge Theory in practice is putting an image of a house fly in men’s room urinals so men stop missing.

Why the Nudge Theory?

The Nudge Theory arose in the US in the early 2000s as an extreme approach to influence the interaction of pensions, savings, and public healthcare. The intention was to improve the quality of society.

Today the Nudge Theory has much greater implications and applications. Nudge principles and techniques are becoming increasingly important in communication, marketing, and for motivating groups. It’s used in the private sector, marketing, sales, organisational leadership, politics, economic, education, among others. The Nudge Theory is applicable in any situation that involves someone or some group trying to influence a person or group. This can be a group of customers, but also society as a whole. It can also be a tool for yourself, to improve your personal health, wealth, and well-being.

The Nudge Theory can be used for parenting, or help governments govern the world’s population. The nudge theory has had a dramatic impact on thinking regarding and methods for motivating and changing people. In addition, nudge theory is about changing groups through indirect means, rather than direct enforcement or instructions.

Central to the Nudge Theory is that people can be helped, both to think in the right way and to make better decisions, by offering them choices that have been designed to have that effect.

Getting started with the Nudge Theory including examples

How can you implement the Nudge Theory in different ways to achieve change?
The key to the Nudge Theory is maintaining the freedom to choose. Instead of trying to alter people’s behaviour through enforcement or penalties, the focus is on encouragement and choice.

To create nudges, it’s important to observe people’s current behaviour, before determining which behaviour has to be altered. You can then design your nudges, which generally fall into three categories:

Focus on the underlying perceptions of organisational behaviour for a change of understanding, leading to a change of behaviour.

These are necessary if you want people to care about a change. One way to achieve that is to refer to other people’s behaviour to emphasise what’s acceptable and desired.

An example: power company A and power company B use information collected by smart meters to tell their customers how their energy consumption compares to that of their neighbours. It has been proven that telling people they consume more energy than their neighbours motivates them to reduce their usage.

These are needed when people feel it’s very difficult to behave as desired. It’s important to tell people that changing and changes are simple. The easier it is, the higher the likelihood that people will implement changes.

An example: you might be hesitant to take action because of certain obstacles. Company A increased revenue by making it easier for people to pay. Instead of directing people to a website with the form, they were taken immediately to the form. This increased the relative response rate.

The following steps are important when designing nudges: 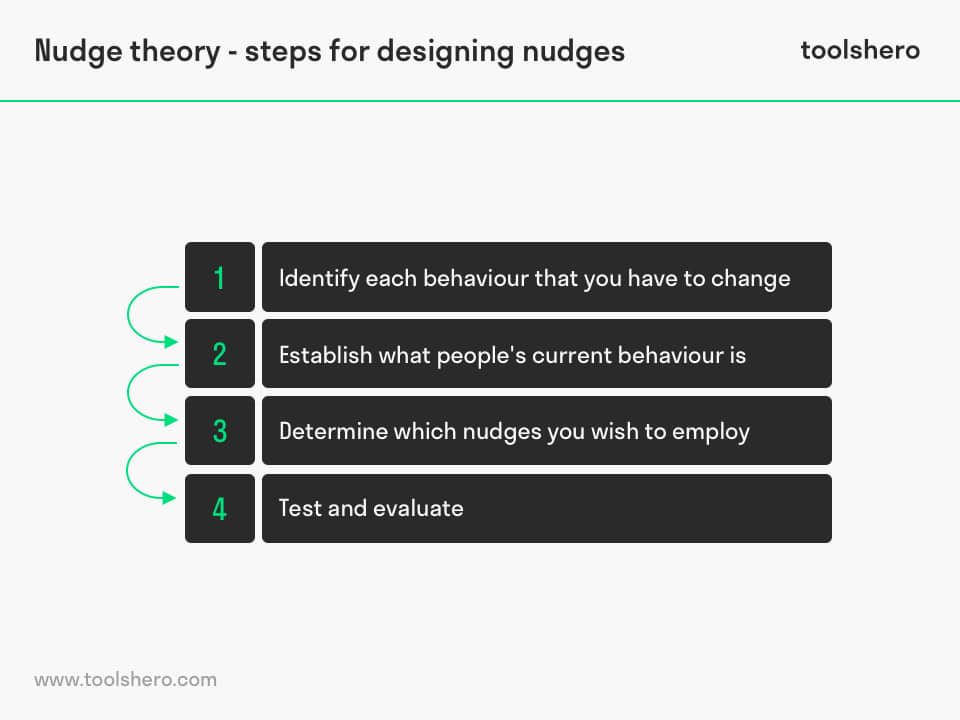 The Nudge Theory was originally designed and proposed in the context of behaviour/behavioural economics, for instance regarding pensions and health insurance schemes. However, the nudge concept can be applied to pretty much any area of human interaction.

Applying the Nudge Theory isn’t very complicated, but it is quite different from conventional methods to try to alter people’s thinking and behaviour. For example, authorities and businesses employ it for change management. Conventional methods to change people use direction and enforcement, often under threat of penalties. The nudge theory on the other hand is about altering people’s environment and choices, to make them more likely to make decisions that are useful and positive.

Nudge techniques can also be used in combination with other methods and theories, such as:

You can use the Nudge Theory as a complete approach, but the elements of nudge theory can also be used separately or in smaller, tactical sets for specific situations. The Nudge Theory is not limited or separate; it’s highly adaptable, which means the methodology can be developed in concordance with and to support other methods, theories, and techniques.

What do you think? Do you recognise the explanation of Nudge Theory, or do you have anything to add? When do you think this behavioural psychology concept would be effective? What do you believe are success factors that contribute to the practical application of this theory?

Add a link to this page on your website:
<a href=”https://www.toolshero.com/psychology/nudge-theory/”>toolshero: Nudge Theory</a>