This article provides a practical explanation of the CAGE Distance Framework, often referred to as simply the CAGE Framework. After reading, you’ll understand the basics of this powerful strategy method.

What is the CAGE Distance Framework?

The CAGE Distance Framework is a tool that can be used to uncover important differences between various countries that companies should take into account when deciding on their strategy. The acronym CAGE stands for Culture, Administrative, Geographical, and Economic. The CAGE Distance Framework helps companies because it can evaluate countries and determine the distance between them. This does not only involve physical geographical distance, but also figurative distances between various cultures, economies, and working methods. 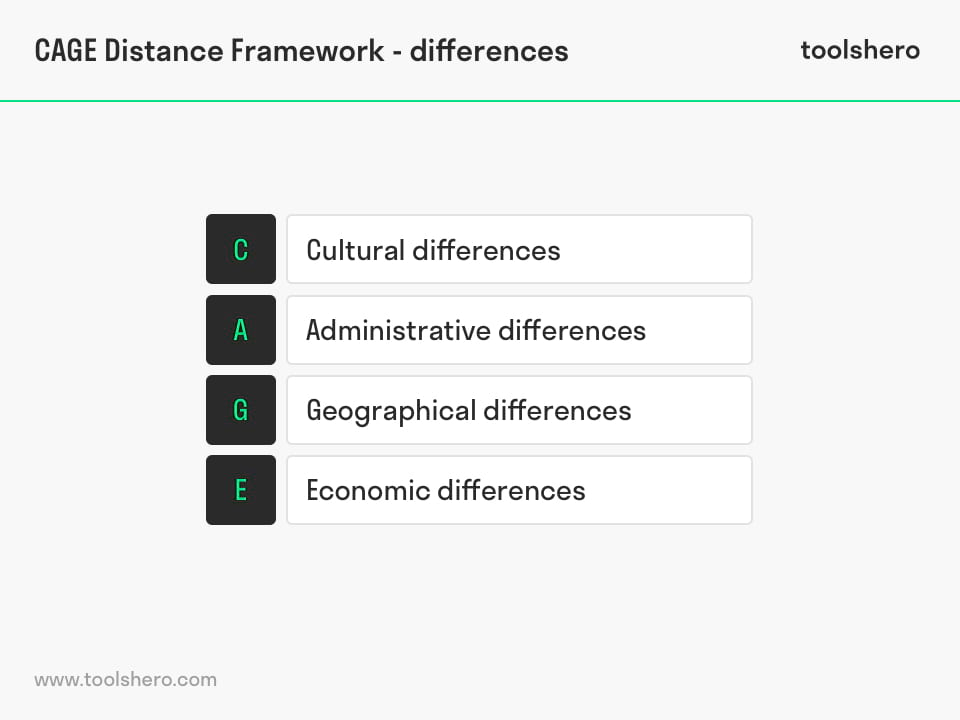 The CAGE Framework was developed by professor Pankaj Ghemawat, a renowned Professor of Global Strategy at IESE Business School in Barcelona, Spain. He was convinced that one should look beyond mere sales potential and analyse the impact of distance. Here, distance is composed of four varieties, one of which is geographical.

The CAGE Distance Framework helps organisations find the middle ground between the measure they use and the measure foreign organisations use. It carefully analyses cultural, administrative, geographical, and economic forces, as well as determining how a comparable market would function in a different country.

As a result, a company will be able to very effectively develop a unique range of products and services that perfectly match the local market conditions and structures. Large international companies carefully analyse local markets too, using this tool, among others. For example, Google is currently having problems in China and Russia.

Unilever has also developed strategies based on data from a country analysis, as opposed to, for example, a PEST analysis. An example of this is Unilever’s strategy in Africa. It introduced products in small volumes into the Nigerian markets, among others, at a small price. This suddenly turned the poorest segment of the population in these countries into a market segment and an opportunity.

When used properly, the CAGE Distance Framework helps companies gain easy access to potential growth opportunities in various international markets. Barriers and risks are part of international expansion, too, but thanks to the framework’s rational and analytical approach, selecting a country for expansion is not a gamble.

Culture may be defined as a collections of values, norms, rules and convictions that form the behaviour of people and organisations. A cultural difference between countries may be religion, ethnicity, or language.

The cultural distance between countries is the first and most important aspect of the CAGE Distance Framework. It’s also one of the subjects that are least clear to management.

After all, culture is far from always visible, yet it has an enormous impact on the behaviour and morality of people in the country, or those of employees in an organisation. Those differences can also be found in various international strategies.

One way of getting a good idea of cultural differences is by using the cultural dimensions described by Geert Hofstede. His description makes clear, among other things, how cultures may differ when it comes to avoiding uncertainty, individualism, orientation, and the balance of power on the job.

The administrative differences make up the second aspect of the CAGE Distance Framework. This mainly involves the historical and current legal and political differences between two countries. It helps the organisation gauge whether these differences are an aid or an obstacle to the expansion strategy. Legislation and regulations can have serious effects for the trade practices between various countries.

The geographical differences are the third element in the CAGE Distance Framework, and involve the physical aspect of the distance between two countries. This includes differences such as their size, transport and infrastructure, climatic differences and other aspects.

It’s also an indication of the distance between two countries in kilometres. Globalisation and digitisation have made geographical differences a lot easier to bridge, especially thanks to factors like the internet, social media, and other technology.

Geographical differences between countries may include:

The fourth type of difference in the CAGE Distance Framework involves the differences between countries with regard to economic aspects such as income, purchasing power, distribution of wealth, and gross domestic product. This may be a great obstacle for companies, but it can also provide opportunities.

For many years, differences between countries have been both an opportunity and a risk for international businesses. These differences may range from saying or not saying ‘good morning’ to colleagues on the job to differences of many millions of Euros in the gross domestic product (GDP).

The CAGE Distance Framework helps the management of organisations that want to expand abroad to clearly identify differences beforehand in the areas of culture, administration, geography, and economy. Professor Pankaj Ghemawat, the developer of the framework, stresses that the differences between countries may be an opportunity, but could just as easily be the cause of an organisation’s failure.

What do you think? Do you recognise the explanation of the CAGE Framework? Which other important differences can you share that are not listed in this article? How could you apply this framework in your environment or workplace? Do you have any tips or additional comments?

How to cite this article:
Janse, B. (2019). CAGE Distance Framework. Retrieved [insert date] from toolshero: https://www.toolshero.com/strategy/cage-distance-framework/

Add a link to this page on your website:
<a href=”https://www.toolshero.com/strategy/cage-distance-framework/”>toolshero: CAGE Distance Framework</a>