This article explains Porter’s Five Forces Model, developed by Michael Porter in a practical way. After reading you will understand the basics of this powerful competitive advantage analysis.

What is the Five Forces Model?

Porter’s Five Forces Model, also known as the competitive forces model, is a competitive analysis model that was developed by Michael Porter.

The five forces are: 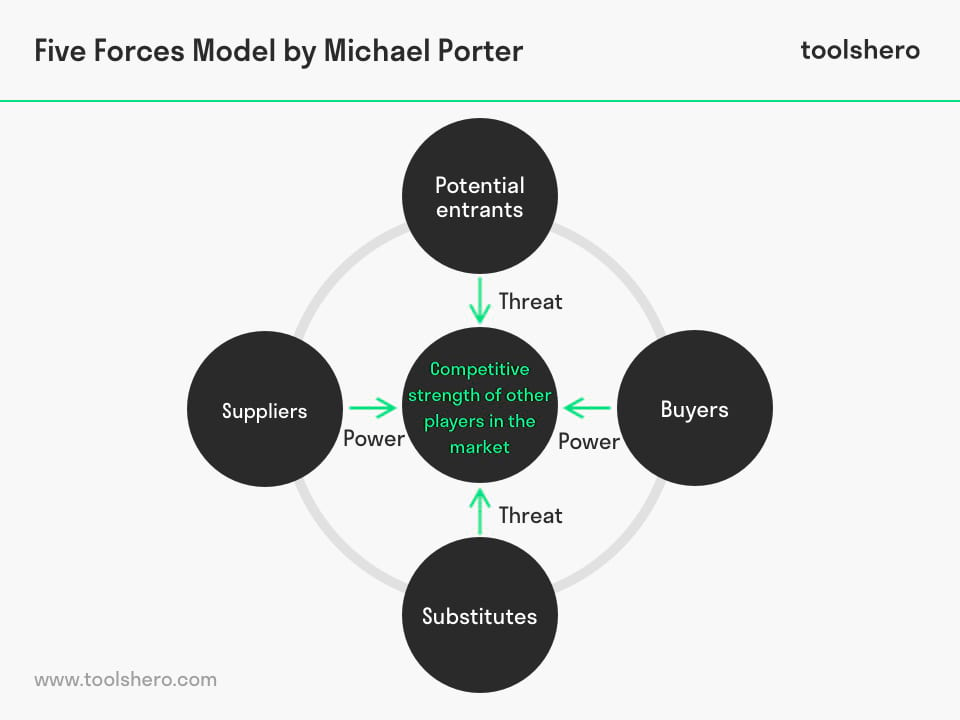 Suppliers, first of Porter’s Five Forces Model, can exercise more power by threatening with increased prices or a deterioration of quality. Supplier power depends on the following six factors:

The number of suppliers

When there are more suppliers, an organization can switch to another supplier in case of threats.

The number of substitutes that are available

Substitutes provide alternatives in case the supplier makes threats. Because of these substitutes, an organization is less dependent on one supplier.

A catering entrepreneur could for instance sell another brand of coffee if there is a conflict situation with the current supplier.

The importance of the business sector for the suppliers

If a supplier creates a lot of profit from a certain business sector, it is crucial to maintain their buyers.

When products are standardised on account of advantages related to money, time and efficiency, a buyer will be less inclined to change suppliers. Think for example of Microsoft: because everyone uses Windows, users will not easily opt for another operating program.

The possibility of vertical integration determines how easy it is for suppliers themselves to produce certain products with a high demand within a business sector. The consequences could be that the present organization loses customers because they are served by the new organization. The organization will then probably have to find another supplier.

The second of Porter’s Five Forces Model is buyer power. When buyers have much power, they can put pressure on the price by playing off the competitors against each other.

The power of customers depends on:

All companies compete in a broad sense with other business sectors where substitutes are produced. These substitutes, third of the Porter’s Five Forces Model, limit the potential revenue for a business sector. The DVD has supplanted the VHS videotape, for example. Substitutes can also be looked for ‘further away’. A family wants to go on a holiday or buy a new car, for example.

The first product has nothing to do with the other but it can still displace the other. This is the third force of Porter’s five forces is buyer power. Complementary goods display a positive correlation with the market. For example when DVDs are becoming much more attractive for consumers (e.g. declining prices) this will have a positive effect on the DVD player market.

Marketing will therefore respond to this effect by means of cross-selling. A good example is a large basket filled with reading glasses that are on sale and which are placed next to the magazines and books.

Organizations entering a business sector are striving for market share. As a consequence, prices of products or services could decline or the costs of the current organizations (competitors) could be higher.

Both effects have a negative effect on the profitability within a business sector because the reward will have to be shared with more people. The probability of new entrants entering the market depends on the existing entry barriers and the reaction of existing competitors to the new entrants.

Economies of scale deter entry by forcing new entrants either to come in on a high scale or on a low scale with high costs as a consequence.

When established enterprises enjoy brand identification and customer loyalty, new entrants are forced to invest heavily to be able to compete with this.

In some sectors, large financial resources are needed before a new entrant can start producing a product. Think of for instance aircraft manufacturing or the automotive industry.

When the logical distribution channels have all been provided by current enterprises, new entrants will have to make investments so they can distribute their products in the marketable sales channels.

The government or the authorities can limit or exclude entrance to a business sector by laying down legal measures such as licence obligations.

Competition in the business sector

This is the fifth force within the Five Forces Model.

When the internal competition (competition between existing firms in the market) is high, for example because of high exit barriers, major strategic risks (there is a lot at stake), little differentiation and low switching costs, high fixed costs and storage costs, low growth or equivalent competitors, the margins can be severely affected by downward pressure.

This creates a low profitability and organizations can react strongly to potential new entrants in such markets. In an industry where homogeneity prevails, such as mobile telephony, the internal competition is very fierce. Companies cannot differentiate so much with respect to the product and therefore they must try and drive away the competitor from the market by means of price wars, for example. As a consequence, the battle for market share will be very fierce and aggressive.

The core of formulating a competitive strategy lies in the positioning of the organization in the business sector.

Proper positioning is one strategy from which an organization can defend itself against the Porter’s Five Forces Model or they can make it work in favour of the organization. The possibilities and strategies that need to be implemented in order to achieve this position are largely influenced by the structure of the business sector in which an organization operates.

What do you think? Is the Porter’s Five Forces Model applicable in today’s modern economy, strategy and marketing environment? Do you recognize the practical explanation or do you have more additions? What are your success factors for a good Porter’s Five Forces Analysis?

Add a link to this page on your website:
<a href=”https://www.toolshero.com/strategy/porter-five-forces-model/”>toolshero: Porter’s Five Forces Model</a>