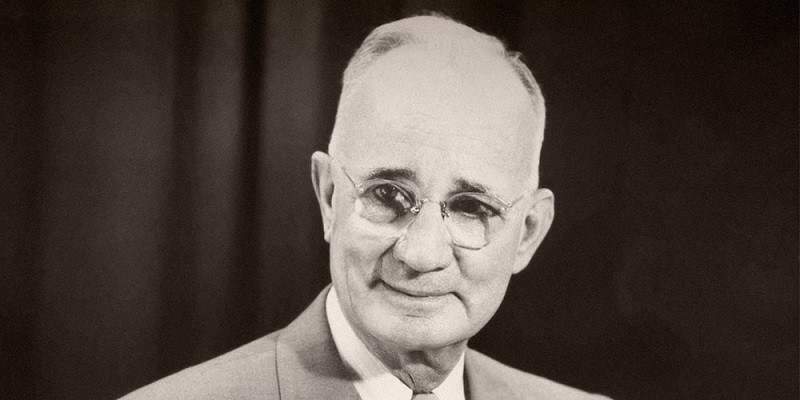 Napoleon Hill (1883 – 1970) was a famous American author and big influencer on the key to success and personal achievement. Most people know Napoleon Hill from the 17 Principles of Success and his best sellers the law of success (1928) and Think and Grow Rich (1937), which sold more than 20 million copies.

Napoleon Hill was born in 1883. His family was poor and they lived in the hills of Virginia.

When he was 13 years old (1896), Napoleon Hill started writing for his father’s Paper. He used these earnings to enter Law school (Georgetown University). This wasn’t enough so he withdraw.

He continued writing and experienced a turning point in 1908, due to an assignment to interview Andrew Carnegie. The duration of this interview was three days instead of three hours. At that time mister Carnegie was one of the most powerful men in the world. He gave Napoleon Hill a proposal to invest his time and efforts of study and exploration in wealthy people to understand their success formula without payment. This challenge took Napoleon Hill because he already was poor and got nothing to lose. Also his curiosity let him to the motivation to go for this challenge. So Napoleon Hill did many interviews of successful people of the time, like Henry Ford, Alexander Graham Bell, and so on.

He shared his first acknowledgements of 45 interviews in his first best-seller Law of success (1928). His manuscript on the Philosophy of Achievement for many other books and study material. Napoleon Hill identified that freedom, democracy, capitalism, and harmony are the foundation of this philosophy. He continued his work, interviewing, writing, speaking and publishing, and set the base for his next best-seller. He discovered during the interviews a secret, which he later described as “the Golden Rule”. This is the rule: “Only by working harmoniously in co-operation with other individuals or groups of individuals and thus creating value and benefit for them will one create sustainable achievement for oneself.”

Napoleon Hill also discovered that time that 98% of people had few or no firm beliefs, which put success out of their reach. During the following years, he invested lots of time in lecturing people on having beliefs, happiness and goals in life. His books and audio lectures remain top sellers, are word widely known and demonstrate the continuing appeal of the myth of a secret of success, the 17 Principles of Success and the lessons learned from his study.

Add a link to this page on your website:
<a href=”https://www.toolshero.com/toolsheroes/napoleon-hill/”>toolshero: Napoleon Hill</a>