This article explains the Systems Development Life Cycle in a practical way. After reading this article, you’ll understand the basics of this powerful internet technology.

What is Feature Driven Development (FDD) in project management?

Feature Driven Development (FDD) is a framework for iterative and incremental software development. The Agile method is used to develop software, aiming to frequently and efficiently produce results.

FDD stimulates reports on all levels, which helps to keep track of progress and results. Unlike other software development methods, teams can regularly and quickly identify and fix errors and bugs. In addition, there is a focus on providing the customer with updates and interim results at any time.

FDD is one of the favourite approaches to software development because it targets two aspects which are usually struggled with: confusion and revision.

FDD is an incremental tool for development, which means it builds on already existing software. Instead of implementing a large and all-encompassing update, FDD is used to release new functions step by step. This way, the client’s requests can be prioritised at all times, maintaining their satisfaction.

FDD combines a few of the project sector’s recognised best practices into a coherent whole. All practices are driven from the customer’s perspective. The most important goal is to, following the rules of the Agile Manifesto, deliver fast working and tangible software

Feature Driven Development (FDD) was thought up by Jeff De Luca in 1997 when he was working on a software development project for 15 months, and with more than fifty employees.

This experience lead to the creation of a series of five processes which entailed the development of a general model. This description was first introduced to the world in 1999 in the book ‘Java Modelling in Color with UML’. This book was written by Peter Coad, Eric Lefebvre, and Jeff De Luca. Later, in 2002, Stephen Palmer and Mac Fesling’s book gave a more general description of FDD, outside of Java.

How does the Feature Driven Development (FDD) process work?

FDD is a model-driven iteration process consisting of five basic activities. These activities are displayed in the figure below. During the first two activities, a general form for the model is established. The last three activities are repeated for every function.

The first main activity consists of developing a general model. The result of this first activity is a high level object model, together with notes about the development, functions and demands. The second step is the compiling of a function list by grouping the different functions into related functionalities and fields.

The biggest part of the process consists of step four and five. These two activities entail tasks such as modelling, programming, testing and preparing.

What are the different activities from the FDD process?

As with all Agile methods, the first step in the Feature Driven Development process is to obtain a good overview of the content and context of the project.

Also, a clear and shared understanding of the target group and their needs must be established. During this preparation phase, teams need to strive for learning everything about the project and the motives. This phase of preparation can be considered as phase 0.

Although not part of the official model, this phase can not be skipped. 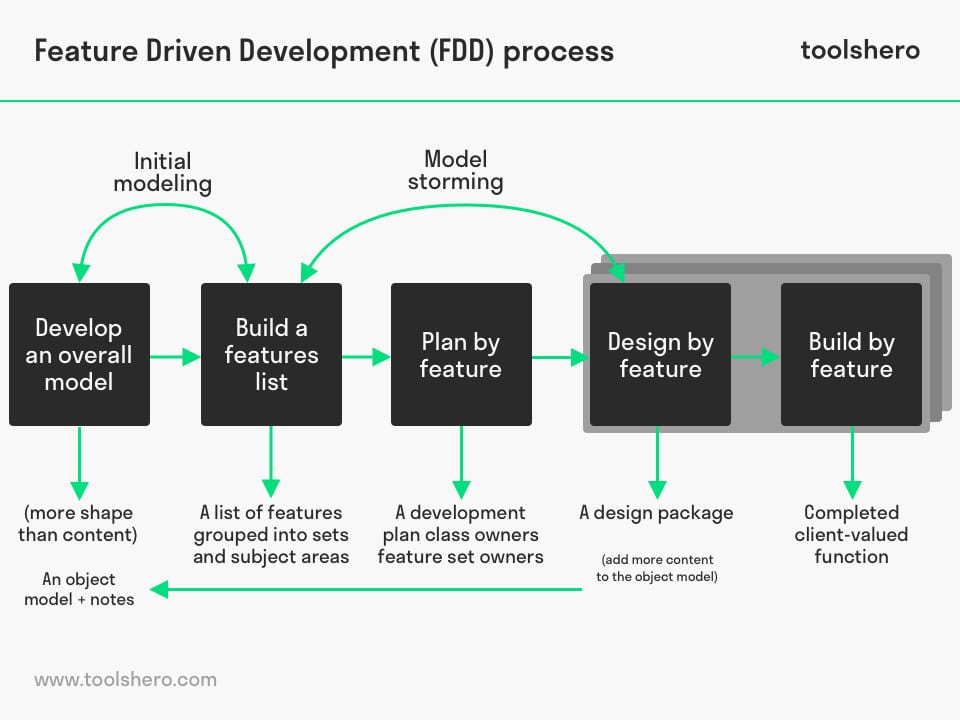 During the first real phase of FDD, results from the previous research phase are worked on. The first real sketch is created. Using the thesis (guideline), the team will develop a detailed domain model, which will be merged into a new general model which will function as a blueprint for the system. During the development, and whilst the team learns and develops, details are added.

The second phase of Feature Driven Development (FDD) consists of the identification of features that the user or client demands and appreciates. It is important to remember that a function is an output which is appreciated by the client.

Make a list of functions which can be completed within two weeks, and realise that these functions are goals instead of tasks.

The third phase consists of the managing of all functions, and the way they are implemented. The team’s workload is taken into account, as are the various risks, and other important aspects which prevent problems from arising.

The team now mainly focuses on the analysis of the complexity of every function, and the planning of tasks which are related to their execution.

During the planning phase, all members of the project should participate in the various evaluation moments which will be held in order to align the functions of the model or system with the demands and wishes of the client.

Also, class owners will be established. These are individual developers who are assigned to certain class functions. Because every class of the function belongs to a specific developer, there is always someone responsible for all classes. If changes are necessary, it is key that the owners of the classes work together.

The head programmer selects, using previously obtained knowledge, all the functions that a team needs to develop. He or she also identifies the domain classes.

After the team has started to work, the domain expert focuses on the analysing and development of the solutions for every function.

The last activity of Feature Driven Development (FDD) consists of the implementation of all necessary elements that support the design. During this phase, for instance, a user interface can be built, or components of the system which were established during the technical design.

Afterwards, a prototype of the function will be made. This will be tested, inspected and approved. After the approval, the function can be added to the main version of the system. Every function that requires more than two weeks, will be further divided into elements so that they adhere to the rule of a maximum of two weeks per function.

FDD is based on a few core principles, or best practices. Seven of them are explained below.

FDD teams regularly inspect to ensure quality. The emphasis is on the design and the code of the system. It is important that during this inspection defects are identified, which otherwise would have surfaced much later.

A feature-team is a dynamic and small team that develops a small feature. They make sure every moment of decision-making is looked at from multiple angles, and that several design options are evaluated.

Even though a single person is responsible for the presentations and the quality of a function, everybody contributes to the design and implementation decisions.

Individual ownership means that different pieces of work, or a piece of code, are assigned to an owner. He or she is responsible for the execution, and needs to guarantee the quality and the performances.

Domain object modelling consists of resolving problems. Teams develop different diagrams to describe objects in a domain and the relationship between objects. This process ensures time is saved during the execution of later activities.

A function or tool that is so complex that it takes more than two weeks to develop, is broken down into smaller functions until each sub-problem is small enough to be solved within two weeks. This makes it easier to deliver the right functionalities and to adjust the system.

Managers lead a project using regular progress reports from all levels inside and outside the project.

A modelling team that uses FDD at least encompasses the following roles:

The development manager leads and guides the entire development team. He or she also oversees the daily programming activities, and is the point of contact for team members.

The head programmer assists with design and analysis, and is sometimes also appointed to supervise and manage smaller development teams.

The class owner is a member of a smaller development team which is led by the head programmer. The responsibilities of the class owner entail design, codes, testing, and documenting of functions.

The domain expert is part of a team that solves the problem through analysis and client contact. The developers rely on the domain expert’s knowledge and skills, and ensure that functions work and deliver what the customer expects.

The use of FDD entails both pros and cons. Below is an overview of the most important aspects of both categories.

FDD has many similarities with Scrum, but instead of being delivery-oriented, FDD is function-oriented. Functions are an important component in FDD. For FDD, functions are what user stories are to Scrum developers. User stories are also small functions that are appreciated by the client.

During the FDD proces, a function should be delivered every two to ten days. In Scrum, the sprints are usually a few weeks. The FDD approach also places more value on documentation for internal use than other methods such as Extreme Programming (XP) and Scrum.

This creates differences in usefulness and roles in meetings. With Scrum, teams meet every day. With FDD, teams rely on the internal documentation which is exchanged as part of the project strategy. There are not as many meetings necessary when using Feature Driven Development (FDD).

What do you think? Are you familiar with the explanation of Feature Driven Development (FDD)? What are your personal success factors for successfully implementing software solutions or other functions? Is FDD used in projects around you? Do you prefer Scrum or other Agile methods? Do you have any tips or comments?
Share your experience and knowledge in the comments box below.

Add a link to this page on your website:
<a href=”https://www.toolshero.com/information-technology/feature-driven-development/”>toolshero: Feature Driven Development (FDD)</a>