Join us for less than 1$ a day and boost your skills! Sign Up

This article provides a practical explanation of participative leadership. After reading, you’ll understand the basics of this powerful leadership style.

What is the Participative Leadership style?

Exactly how the manager participates in the team depends on which form of Participative Leadership is applied. Generally speaking, at the core of this leadership style is that the manager often actively asks for feedback and uses this input for future decision-making. This can be done in several different ways, however.

The Rise of Participative Leadership

The first leadership theories emerged around 1930, when an experiment called Hawthorne took place. The experiment was intended to improve productivity in the workplace. The results were studied by Elton Mayo, among others. Henry A. Landsberger then discovered that productivity would be higher if employees were closely observed. This was referred to as the Hawthorne-effect.

Later, in 1967, Rensis Likert and his colleagues identified the foundation for later leadership theories. After more than 30 years of research, the following leadership styles were eventually formulated:

Although a clear definition of Participative Leadership is elusive, there are four different types that have been identified on the spectrum of little to much participative leadership behaviour. 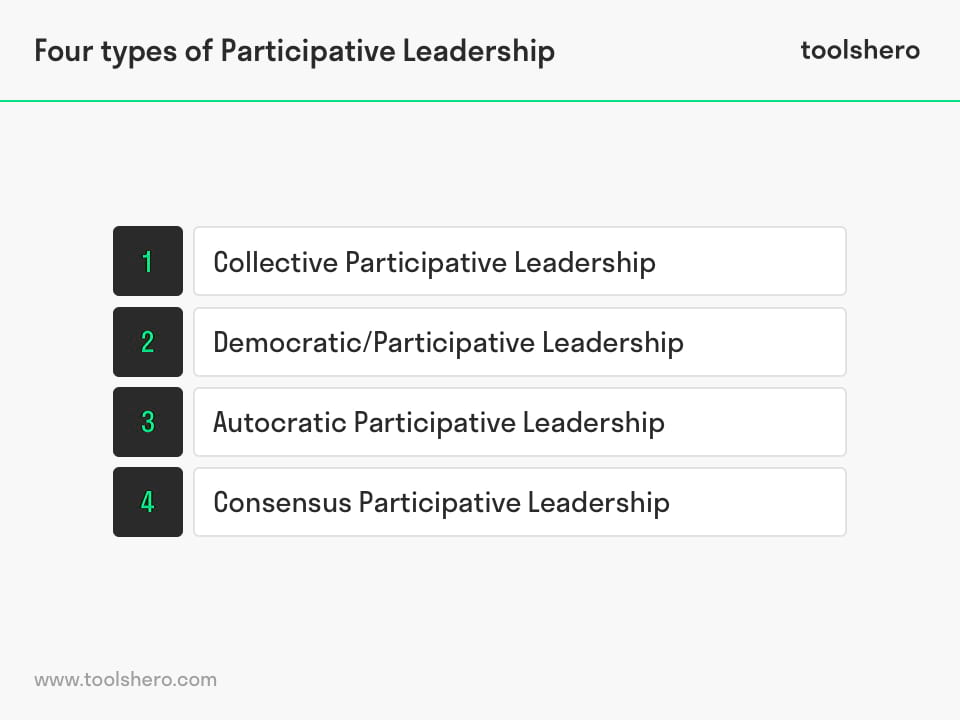 The collective Participative Leadership style is at one end of the spectrum. In this leadership style, the leader and group collectively take all decisions. In this approach, responsibility is also divided among each member of the group.

In this style, employees are encouraged to share their opinion and vision about matters. However, the eventual decision-making power lies with the leader. The leader holds all responsibility for the decision to be made. Moreover, he / she is also the person that must provide an explanation in case of unsatisfactory results. In this style, the leader makes the effort of removing concerns from stakeholders by presenting them to the group.

With very little participation from the manager, the autocratic Participative Leadership style is on the left side of the spectrum. Although final decision-making power is in the hands of the leader, input from employees, or subordinates, is still listened to.

In this decision-making style, the leader lets the group make decisions together. This is often done by a vote, after which the majority’s preference is chosen.

The use of Participative Leadership is not equally effective in all industries. Nevertheless, this form of leadership is popular, and has been the subject of plenty of research throughout the years. A participative leadership style in practice is mainly expressed by the following dimensions, as established in research by John Cotton. This first dimension is about participation of subordinates in decision-making related to the work. Having a voice in decision-making can take on different forms. For example, sometimes employees are only involved or interviewed; other times a certain amount of power is actually handed to them.

This approach to Participative Leadership is often applied in project management, when the manager discusses in advance how and when certain goals and interim results must be achieved. In this situation, team members are given the opportunity to share their input, and thus have partial control over agreements made in this regard. On the other hand, the project manager has complete control over the project’s finances.

Consultative participation generally implies that subordinates participate in various business activities. The person who ultimately makes the decision remains the leader, but in almost all areas the subordinates are asked to share their opinion and vision. They generally have less influence in the final decision-making process, however.

In this dimension of Participative Leadership, subordinates are only temporarily involved in decision-making and operational management. This short-term participation uses a formal structure and direct participation framework. An example of this form of participation is when an organisation introduces a new project, and has an existing team perform the start-up phase. This is usually for a short period, after which decision-making power is returned to the project leader.

The above forms all have a formal nature. However, participative leadership may also occur in less formal settings. A typical informal setting or situation has no set rules or procedures. Instead, everything is evaluated and addressed on the spot. An example is a planned manager meeting, in which he/she informs his/her employees of upcoming changes or bad news, for example.

In the employee property dimension, subordinates can participate in certain elements of company decision-making, although the degree to which they can depends on each employee’s position. Generally speaking, employees in a lower position have fewer opportunities to participate in direct management or decision-making than colleagues in a higher position.

How to cite this article:
Janse, B. (2019). Participative Leadership. Retrieved [insert date] from toolshero: https://www.toolshero.com/leadership/participative-leadership-style/

Add a link to this page on your website:
<a href=”https://www.toolshero.com/leadership/participative-leadership-style/”>toolshero: Participative Leadership</a>

toolshero helps you to gain more knowlegde, boost your skills which increases your chances of success.