This article provides a practical explanation of the Cultural Web Analysis. After reading this article, you will understand the basics of this powerful management and organisational culture tool.

What is the Cultural Web Analysis?

The Cultural Web Analysis was developed by Gerry Johnson and Kevan Scholes in 1992. Before the paradigm and its six elements are described, Johnson and Scholes’ ideas regarding organisational culture are discussed.

The regional and national context must be considered, as this greatly influences the stakeholders’ expectations. The nation or region is based on social values that may differ from the values of the organisation. Particularly for internationally active organisations, it is important to understand and respect the regional culture.

An effective organisational culture is characterised by:

The six elements of organisational culture

Johnson and Scholes referred to the coherent whole of natural assumptions that form the paradigm by the term ‘Cultural Web’. The paradigm consists of six types of physical and observable utterances of organisational culture. 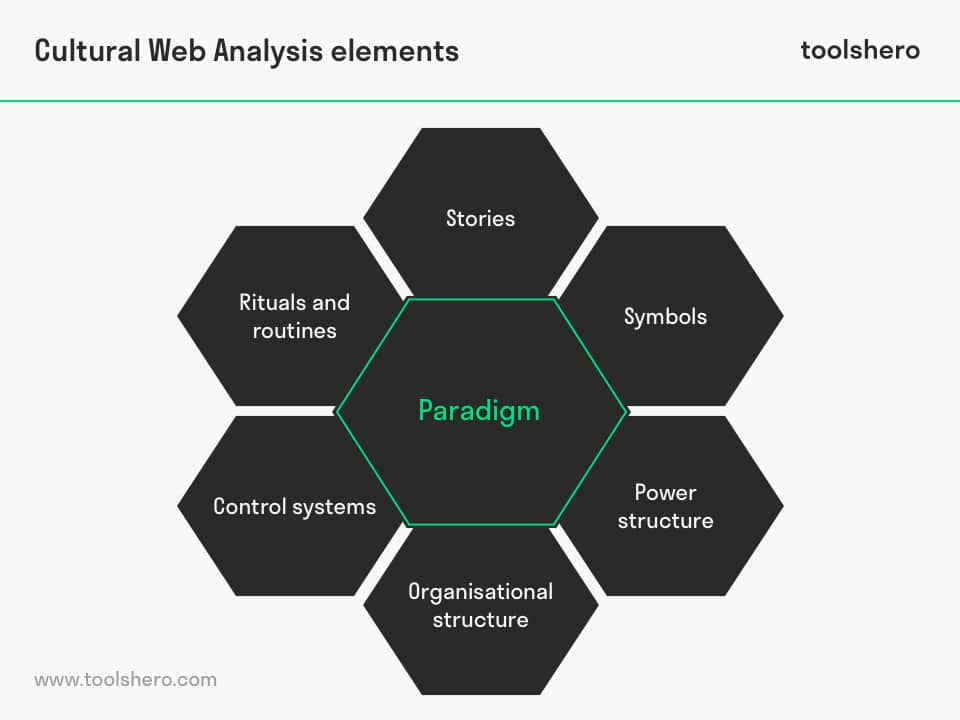 The symbols are about recongisable expressions of the organisation, such as the office building, the corporate identity, the logo, the company cars, the functions, the dress code and the use of language.

This element is regarding the way in which the organisation is being managed and controlled. This includes the financial systems, the quality systems and rewards. How these rewards are determined and how these are distributed within the organisation also falls under control systems.

Rituals are the events of an organisation in which they emphasise what is truly important to them and how they handle matters. Examples of this are: Friday afternoon drinks, training courses, promotions and the recruitment and selection policy of the organisation. Routines that reveal much about the way employees interact with each other and others both within and outside the organisation.
Sub-cultures within an organisation

A single dominant culture can only develop when all employees regularly interact with each other and are confronted with the same problems and people. However, labour specialisation weakens this structure and joint values are shared less often. As a result, a sub-culture may arise within a single department. They do share the joint assumptions within an organisation, but also have deviating, specific ideas regarding their vision or their tasks. It is highly important that these sub-cultures do not isolate themselves from the shared culture too much, because a lack of union often breads counter-productivity and rivalry. Managing various cultures is therefore a challenge that many CEOs struggle with.

How to cite this article:
Janse, B. (2018). Cultural Web Analysis. Retrieved [insert date] from ToolsHero: https://www.toolshero.com/management/cultural-web-analysis/

Add a link to this page on your website:
<a href=”https://www.toolshero.com/management/cultural-web-analysis/”>ToolsHero: Cultural Web Analysis</a>