Become a member of our e-learning platform and boost your skills! Find out more

This article explains the ABC model of Behavior, developed by Albert Ellis, in a practical way. After reading, you’ll understand the basics of this powerful mindset tool.

What is the ABC model of Behavior?

Albert Ellis first introduced the ABC model to apply it to people for overcoming pessimistic thinking. According to Ellis, the method is based on how individuals experience or perceive particular situations. The way people think, immediately impact the beliefs about future events and personal happiness. These thoughts could be irrational, which can next be evaluated with the ABC technique.

For example, a person might get angry because of a particular event. The chance is doubtless high that this person is blaming another individual for making him or her feel this way. This is a typical example of the ABC technique of how an individual may have irrational thoughts because the person allows him or herself to have negative emotions. Although a problematic situation could have occurred, the way how it is dealt with determines the current emotions and behavior of an individual. 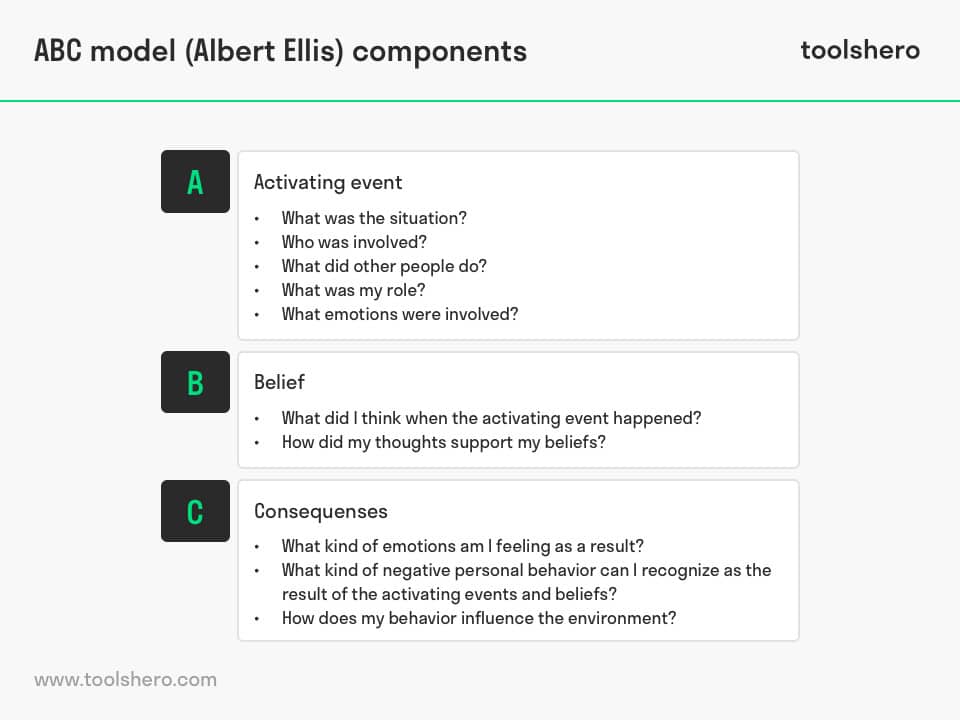 This component of the ABC model can also be described as a trigger. It is concerned with the actual situation, and it analyzes the triggers that cause an individual’s thoughts and emotions. It always deals with events that have resulted in emotional reactions or irrational thinking. The following questions could an individual ask to analyze the activating event:

Consider the following example of an employee in an international company where the ABC model will be applied. The employee will be called Tanya and works for company XYZ.

Tanya work since recently for company XYZ. She is hired because company XYZ is consolidating three international offices in a centralized office that controls the regional markets. Tanya’s responsibility is to ensure smooth operations, and if necessary, discuss, request, and implement changes to standard ways of working.

Tanya is excited to successfully complete the job because challenges and hard work motivates her. She reports directly to the country manager but also gets assigned tasks from the department directors.

During the job, Tanya was assigned many assignments while she was at the same time identifying ways to consolidate the operations of three offices into a centralized office. Tanya was working hard and could barely manage to finish the workload before the deadlines. At the same time, Tanya’s direct supervisor, the country manager, assigned Tanya a job which he requested to be complete earlier as agreed because of some urgency. As a consequence, the country manager asked Tanya if the assignment was almost completed.

Tanya responded to her manager that the assignment was almost finished and that she will deliver it ASAP. However, in reality, Tanya was far from completing the job. She was annoyed because the continuous incremental work was too much for her. However, she did not complain visibly, and she set new priorities and finalized the assignment as fast as she could.

When she finished the assignment, the country manager was surprised about how fast she completed the task. Tanya got praised, and her work and contributions were valued.

Evaluation of the ABC model example

Let’s now evaluate the situation by using the components and the previously described questions of the ABC model.

Tanya was a new employee and closely collaborated with senior management. She had a responsibility and had to prove herself. She was driven by challenging work, but the workload became too much for Tanya. Based on the activating event of the ABC model, she felt frustrated and had to find innovative ways to finish the work.

Tanya believed that it was expected that everything had to be finished as soon as possible. Since she had many assignments on her task list, Tanya thought she was running behind. She additionally felt that she could not keep up with the workload. However, in this case, her beliefs were not correct because she had more time left to finish the assignment.

As a result, Tanya told the country manager that one of the tasks she had been assigned to was almost finished while she still had to work on the assignment. She experienced pressure and felt a tendency of urgency. In this case and based on the ABC model, Tanya’s behavior demonstrated to positively influence the environment because her hard work could motivate others.

However, Tanya could be honest with her manager and explain about other priorities she had. Together they could find a solution and see which structure would work best. In this scenario, Tanya’s thoughts about the working pressure from various assignments were wrong because her manager would have given her more time to finish the work.

The ABC model is a commonly used tool that evaluates personal beliefs and how this affects functional thinking. By utilizing the ABC technique, individuals may understand the connection between their thoughts, emotions, and behavior. The most important part of the ABC model is that it demonstrates that occurring events do not directly affect an individual’s feelings and behavior. Still, the way how one thinks and what one believes determines the resulted emotions, beliefs, and behavior. This means that the way people feel, and the way people behave results solely because it is chosen to be.

The ABC model can be applied in various situations, such as in business settings, but it can also be used for personal circumstances. It is today frequently used by therapists who treat behavioral problems of clients. For example, the ABC technique has been successful in treating aggressiveness because it forces clients to analyze the triggers and the resulted in actions and behaviors, instead of avoiding the triggers that could again lead to aggressiveness.

In addition, the ABC model helps individuals to easily structure events and how this influences the individual’s thoughts. It easily demonstrates how a personal way of thinking influences behaviors.

Finally, the ABC model can be extended by adding the letter D and E. The letter D stand for disputations to challenge irrational beliefs, which basically means that irrational thoughts have to be changed into a belief that is more rational. The letter E stand for effective new beliefs that replaces the irrational ones, which means that the more rational beliefs must have a more positive impact on the individual concerning how one thinks and beliefs.

What do you think? Are you familiar with the explanation of the ABC model? In which situations would you apply this tool? Do you recognize irrational thoughts on a personal level? How can the ABC model help you or people in your organisation?

Add a link to this page on your website:
<a href=”https://www.toolshero.com/psychology/abc-model-albert-ellis/”>toolshero: ABC model (Albert Ellis)</a>