This article provides a practical explanation of Osgood’s Congruence Theory. This theory was developed by Charles Osgood and Percy Tannebaum. After reading, you’ll understand the basics of this powerful psychological theory of communication and persuasion.

What is the Congruence Theory?

Osgood’s Congruence Theory is a theory of the same calibre. However, the theory focuses on the role of persuasive communication in behavioural changes. The Congruence Theory or Congruity Theory is similar to the previously mentioned models, in that it also postulates that people automatically tend to prefer certain elements of the cognitive system to be internally consistent with each other. Osgood’s Congruence Theory describes the element of communication within the internal struggle of consistency. The moment a person receives a convincing form of communication, but has a negative attitude towards the source of this communication, he or she will be motivated to revise both attitudes to some extent in order to restore consistency. 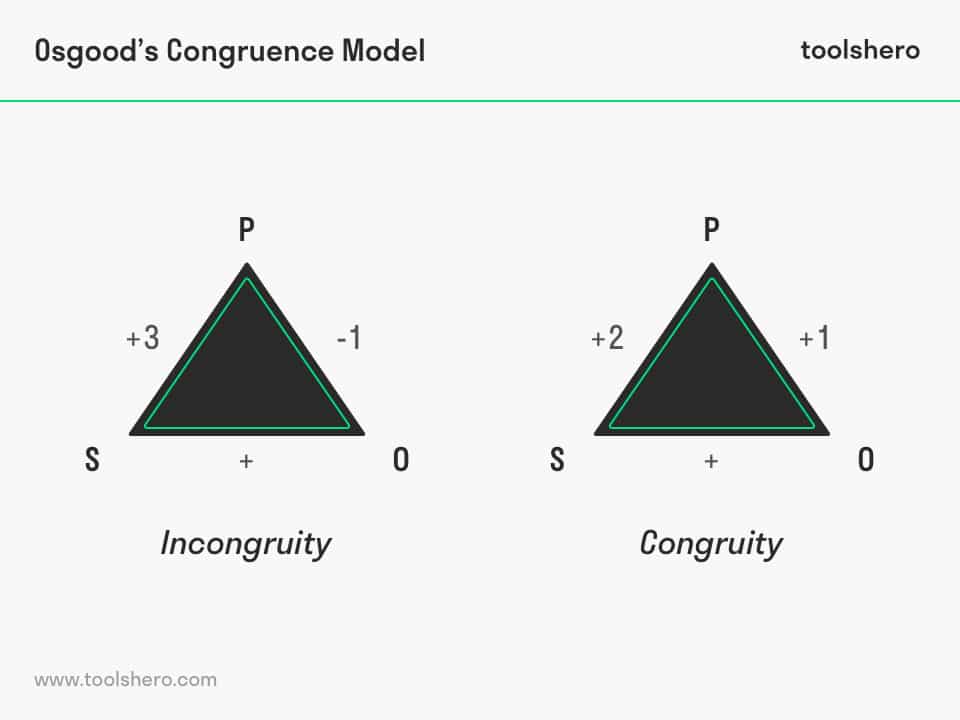 A feature of Osgood’s Congruence Theory is that it focuses on communication and persuasion. The more refined version of Heider’s theory takes S as a source of communication. P is the audience, and O is the concept. In this triad, two out of three relations are quantified. These are (1) the audience’s preference for the source (S) and (2) the audience’s attitude to the concept. Both relationships are represented by a number (1-7) and a direction.  The direction is indicated by a plus or minus sign. The congruence theory is therefore about situations in which the source makes a statement about a concept, and how the public has a certain attitude towards the source about the concept. This is an attitude of either being associative (positive) or dissociative (negative). The theory furthermore poses that incongruence (read: imbalance) is unpleasant, and the audience will always be motivated to change their attitude.

Application of the Congruence Model in practice

One interesting application of the model was made to test whether the theory is correct. The test consisted of several hypothetical situations. Test subjects received a long list of famous people such as Eisenhower or the Soviet leader Kruchev, and were asked to report their attitudes to concepts such as communism and democracy. These subjects were later told that Eisenhower or the Soviet leader had made a statement about communism or democracy. Researchers were keen to measure the imbalance in these individuals, so, for example, an associative concept like democracy was linked to dissociative sources such as Kruchev. Other hypothetical situations associated sympathetic sources with dislikes, and dislikes with sympathetic concepts.

The results showed that the predictions of the Congruence Theory were generally supported in practice. The subjects’ attitudes usually changed in the predicted direction. However, the exact direction differed slightly from reality. The results prompted the theorists behind the Congruence Theory to make two changes to the formula. These changes are called post hoc hypotheses because the findings do not stem from the theory, but from ex post research. In fact, they are more like patches that try to fix errors in the theory.

The first change was called the assertion constant. This means that when a source makes a statement about a particular concept, that statement tells more about the concept than it does about the source. This stems from the assumption that people are probably more complex than things. Thus the researchers determined that the model would not change the subject’s attitude as much as the model predicted.

In addition, the researchers noted that when a source claims something contradictory, such as Eisenhower praising communism, Osgood’s Congruence Theory didn’t predict a change in attitude. The theory was therefore updated again, and adjusted so that predictions wouldn’t work when a source said something about a concept that the public didn’t believe the source would actually talk about.

How consistency between cognitions is expressed

All consistency and congruence models are about the relationship between different cognitions (thoughts, ideas, attitudes). The idea is that people will always try to achieve harmony and consistency in their thoughts. When inconsistency occurs it will motivate individuals to change the thoughts or attitudes where imbalance exists. What follows is a simple example.

If Jeffrey becomes a fan of Formula 1 racing driver Lewis Hamilton, and he learns that Hamilton is very fond of a particular sponsor brand, it is very likely for Jeffrey to start liking that brand as well. Hamilton likes the brand, so Jeffrey does too. Consistent thoughts and attitudes to a concept are easier for Jeffrey than trying to figure out why he dislikes the brand, while his hero is the exact opposite. Jeffrey could still rationalise disagreements about the sport, but it is easier if he doesn’t. Inconsistency between concepts, attitudes and sources will often – but not always – lead to changes.

Congruence Theory and the role of convincing communication

Consistency theories like Osgood’s Congruence Theory are designed to understand how and when inconsistencies between cognitions will change attitudes.

Consistency and congruence underlie all science. The fact that phenomena can be ordered or be made consistent makes predictability possible. Predictability allows scientists to formulate and test hypotheses. Based on the results of such tests, they can discover generalisations, develop theories, and predict future results.

The concept of consistency between human cognitions is an extension of the general understanding of the physical world and the world of human behaviour. Different theorists argue that people strive for consistencies between behaviours and beliefs in different ways, even in the formation of their own personality. It is intrinsically human to organise the world in a way that seems meaningful and sensible. The concepts of consistency are based on the idea that people act in a rational way. Rationalism is also used in attempts to explain irrational behaviour in a rational and consistent manner. Rationalisations mean that in an effort to become consistent, resources are used that can be viewed as irrational by others. Inconsistency causes discomfort, or psychological stress, and so the pressure is increased to eliminate or reduce this inconsistency.

Examples of attempts to rationalise events or concepts with irrational concepts are commonplace in everyday life. For example, when a strong football team faces defeat against a rival, the following day’s headlines will be full of rationalisations and justifications.

The pursuit of congruence is not only characteristic of the individual human brain, but it is also done in business. Business congruence models are popular and work the same way. They are part of change management, and examine a company’s performance as a system. For example, a company is split into different elements and the matching model examines these elements and tries to improve the organisation by improving each individual part and bringing it into harmony with all other business units. Congruence between the following business elements is important according to Osgood’s Congruence Model.

Consistency in mission and business activities

Each company has a vision for the future. This vision determines how the decision-making process is handled and how the company interacts with the outside world. The vision is reflected in the company’s mission statement. The Congruence Model examines whether the mission statement is consistent with the methods the company uses to project its vision on entities inside and outside the company. For example, if the company is committed to high-quality customer service, Osgood’s Congruence Theory examines how the belief that customer service is important translates into concrete policies. Moreover, the model checks whether the activities carried out by the organisation are in accordance with the general mission statement of the company.

Congruence and the outside world

The productivity of companies is influenced by outside influences: competition, the market, suppliers, customers, laws and regulations, etc. The Congruence Model looks at how the company uses external influences to identify and seize opportunities.

What do you think? Are you familiar with the explanation of Osgood’s Congruence Model? Do you see any similarities with Festinger’s cognitive behavioural theory, for example? Do you experience, or have you experienced, inconsistencies between certain cognitions? Can you give examples of situations in which psychological stress arises as a result of inconsistency between, for example, beliefs and convincing communication of a role model? Do you have any other tips or additional comments?

How to cite this article:
Janse, B. (2020). Osgood’s Congruence Theory. Retrieved [insert date] from toolshero: https://www.toolshero.com/psychology/osgoods-congruence-theory/