This article explains the Self Determination Theory or SDT, developed by Edward L. Deci and Richard Ryan in a practical way. After reading it, you will understand the basics of this powerful Personal Happiness and motivation theory.

What is the Self Determination Theory?

Self Determination Theory focusses on the human motivation and personality, which relate to, among other things, the innate psychological human needs. It researches the reasons behind the choices people make from themselves, without being influenced by external factors. It is about individual behaviour with which people motivate themselves and from which they handle.

The external factors that stimulate, motivate and move a person, are called extrinsic motivators. Within organisations this means that employees are extrinsically motivated by, for example, rewards, annual numbers, evaluations and references.

The opinion their colleagues have of them, also belongs to this category. On the other hand, people are also motivated and stimulated from within. It is their personal interest, curiosity, or drive to learn something new, that belongs to this intrinsic motivation. This develops passion, creativity, and determination. The interconnection between the extrinsic and the intrinsic motifs form the basis of the Self Determination Theory.

Man is an active organism that improves, develops, and lifts itself to a higher level. This development with regards to thinking is a natural proces, but from Self Determination Theory stems the belief that it isn’t an entirely automated one.

It demands ongoing social nutrients and support. The social context can support or block this psychological growth. The tension field between the man and his social context determines his behaviour, experiences and developments.

SDT believes that the most desirable and high-value forms of motivation and involvement are perseverance, improved performance, and creativity. To support this, autonomy, competence, and relatedness are essential. Failure to support one of these three psychological needs within the social context will have a detrimental effect on one’s well-being. 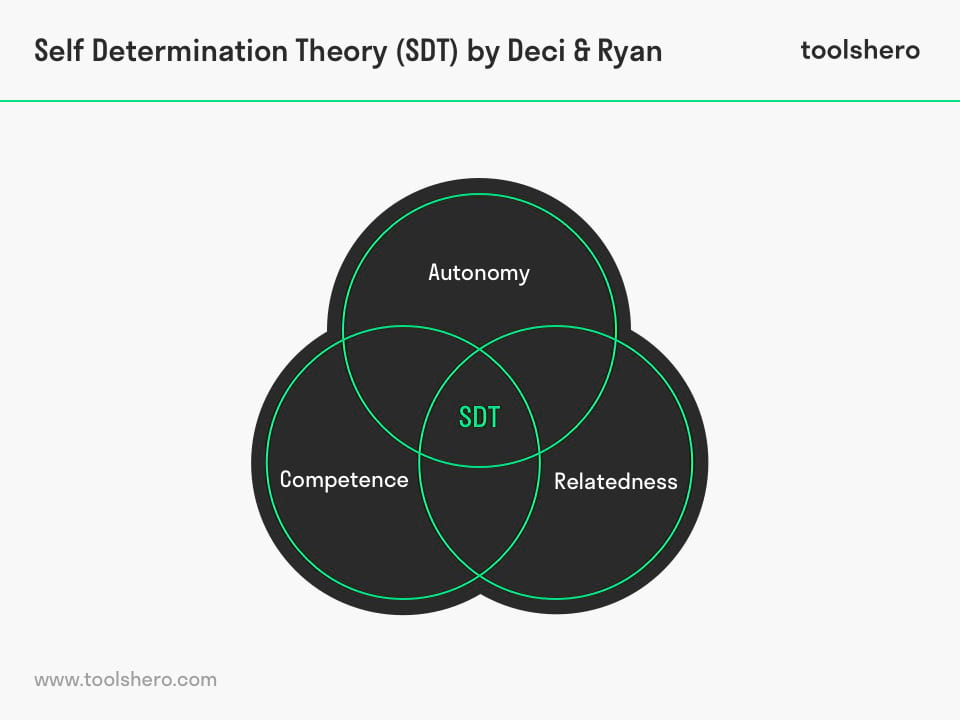 The Self Determination Theory emphasizes the natural growth of people towards positive motivation. People must be nourished by the social environment, which leads to improved happiness and well-being. If this doesn’t happen, and the basic needs are not met, there will be negative consequences.

The need for autonomy, competence, and relatedness are three universal and congenital psychological needs, according do Deci and Ryan. When satisfied they lead to optimal motivation. SDT assumes that man exhibits positive qualities, makes an effort and allows freedom of choice.

Within the Self Determination Theory this is known as the inherent growth tendencies. In addition, man has the innate psychological need for self-motivation. When the three elementary psychological needs are met, this will increase health and well-being. These needs can be applied universally, but can manifest differently based on time, culture, or experience:

This is the urge to see connections between one’s own actions and those of others in the environment. Edward L. Deci and Richard Ryan discovered that extrinsic rewards for intrinsically motivated behaviour undermined intrinsic motivation. Resulting in a decrease of autonomy. It is better to reward intrinsic behaviour intrinsically, as it grants an individual the idea of having more control over his/her life.

This is about the urge for connection with the environment and other individuals. It is also known as ‘psychological connection’. Man is a social animal and has the need to be, and communicate with, other humans.

Formally, the Self Determination Theory consists of 6 sub-theories that have been developed to explain motivational phenomena.

The third theory is that of Causality Orientations, which describes individual differences in the way people orient themselves to the environment and regulate behaviour in different ways. For example, individuals act out of interest and/or from what happens in their environment.

The fourth theory is that of the Basic Psychological Needs, which shows that psychological well-being and optimal functioning are based on autonomy, competence, and relatedness. In essence, this forms the basis for the Self Determination Theory. The fifth theory is the Goal Contents Theory, in which the difference between intrinsic and extrinsic goals, and their impact on the motivation and the well-being of man, are described. Extrinsic goals, such as financial success and fame, are diametrically opposed to intrinsic goals. In the latter case, think of appreciation, interpersonal relationships, and self-realization.

The final is the Relations Motivation Theory, which focusses on all possible human relations and interactions that are essential for behaviour, adaptation, and well-being.

What do you think? Have you ever heard of the Self Determination Theory by Edward L. Deci and Richard Ryan? Do you recognize the practical explanation or do you have more suggestions? What are your success factors for personal happiness and how do you get motivated?

Add a link to this page on your website:
<a href=”https://www.toolshero.com/psychology/self-determination-theory-sdt/”>ToolsHero: Self Determination Theory (SDT)</a>