This article explains the Social Learning Theory, which is developed by Albert Bandura in a practical way. After reading this article you will understand the basics of this powerful process to master skills.

What is the Social Learning Theory?

The Social Learning Theory was invented and developed by the Canadian psychologist Albert Bandura. The foundation of this theory shows that a personality does not only consist of observable behaviour, as traditional psychologists believe, but that cognitive processes play a crucial role in the changing or mastering of behaviour patterns.

The goal of the social learning theory is to show that an individual can learn in multiple ways. People make choices based on self-reflection, but mainly the environment in which a person finds themselves influences the way they behave and learn. The learner, the person who is at the center of this theory, processes different impulses in different ways.

Operant conditioning : A distinction is made between two kinds of behaviour: respondent behaviour and operant behaviour. Respondent behaviour is an automatic reaction to a stimulus. When a person’s retina is confronted with bright light, the person starts to blink. This reflex is involuntary and unintentional. Operant behaviour on the other hand, is entirely voluntary and controlled. A person operates in their environment and receives feedback in the form of consequences. These consequences ensure that a person will or will not change their behaviour.

From the moment a person is born, the development mechanism that is called observational learning, starts to work. Effectively, this means that people learn by observing what other people do. The reason for someone to imitate behaviour is indicated as observational reinforcement: seeing the consequences a person experiences from the taken action. For example: a student receives a compliment from their teacher regarding the difficult calculations they made. Their classmate hears this compliment, which motivates them to also study the difficult assignments.

The same principle also works the other way around. When a student arrives to class late, he will be admonished to arrive on time, possibly even punished. Their classmates observe this and draw the conclusion for themselves that it is better to be on time. However, these forms of observational reinforcement do not work in all cases. Reinforcers are often personal and can change with the development of the learner. A material reinforcement can have an opposite effect, the source of intrinsic motivation can be lost (Two factor theory Herzberg).

An important part of the process that initiates behaviour change is the observing of the consequences that certain behaviour has. However, not all behaviour is followed. Behaviour can only be changed when an individual has complete control over a situation and when they can realise certain outcomes. Bandura calls this concept self-effectivity. 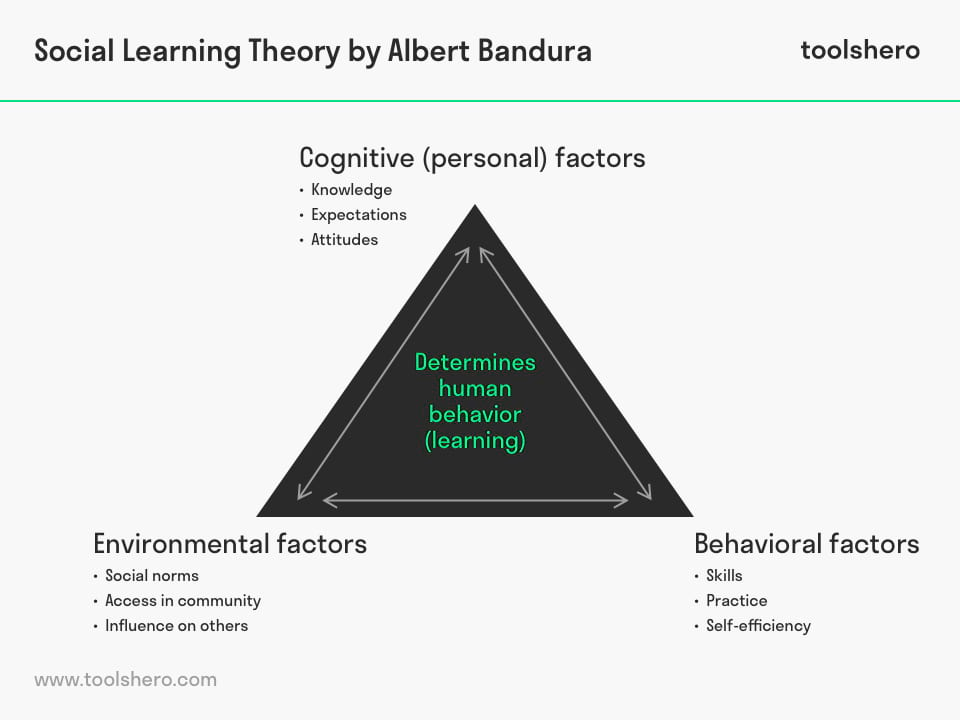 Several factors ensure that people imitate behaviour of others. Albert Bandura developed a model that clarifies this. The model was published in 1971 and is shown above.

The observing of a model with status is necessary for the adaptation or imitation of behaviour. Imitation is not possible without the learner being able to mirror themselves to a model. Partly due to social media, the amount of attention that is given to certain role models has increased exponentially.

The observation needs to be stored before it can be reproduced. The behaviour can be observed, but that does not mean that it is automatically internalised. The human does not do social learning in a direct way, so the memory plays an important role in the process.

Reproduction is the ability to perform internalised memories as behaviour. Many behaviour characteristics are retained on a daily basis, but not everything will be used later on. In some cases, the physical condition of the learner limits the desire to change behaviour.

The model that is mirrored by the learner has a status. When a model has a large status it is plausible that its behavior is imitated. For example, children look up to their parents and therefore adopt behavior after observation. Pop stars, famous actors or other influential people can also be seen as a model. From this it can be concluded that similarities between the model and the learner increase the likelihood that behavior will be imitated.

Generally, behavior that is empowered is imitated. However, it is necessary that the ratification is not purely materialistic. The learner must also be intrinsically motivated to follow the model. 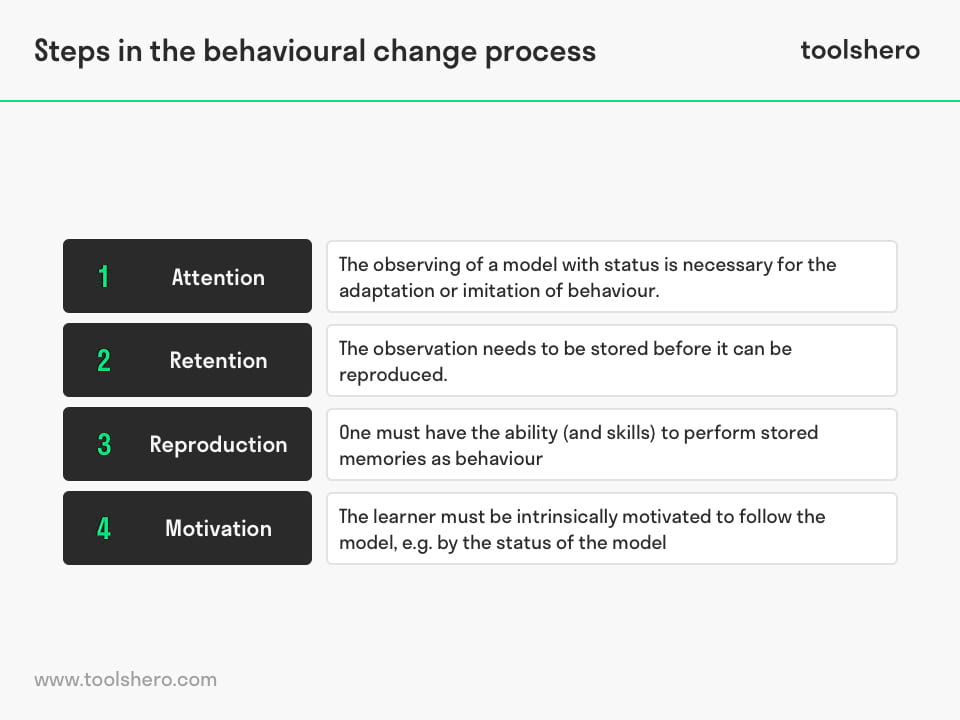 The adaptation to the environment starts at a very young age. By observing, behaviour can be adapted or taught. By analysing the consequences that certain behaviour has, a process is or is not initiated that can change the behaviour. Role models with a high status are often looked up to. This is one of the factors that plays a role in the copying of behaviour. Albert Bandura shows, with his social learning theory, that good examples will be followed, but it also works the other way around.

What do you think? Do you recognise certain behaviour that you copied or adapted after you observed how someone else did it? Do you see other people imitate behaviour of role models?

How to cite this article:
Janse, B. (2018). Social Learning Theory. Retrieved [insert date] from toolshero: https://www.toolshero.com/psychology/social-learning-theory/

Add a link to this page on your website:
<a href=”https://www.toolshero.com/psychology/social-learning-theory/”>toolshero: Social Learning Theory</a>