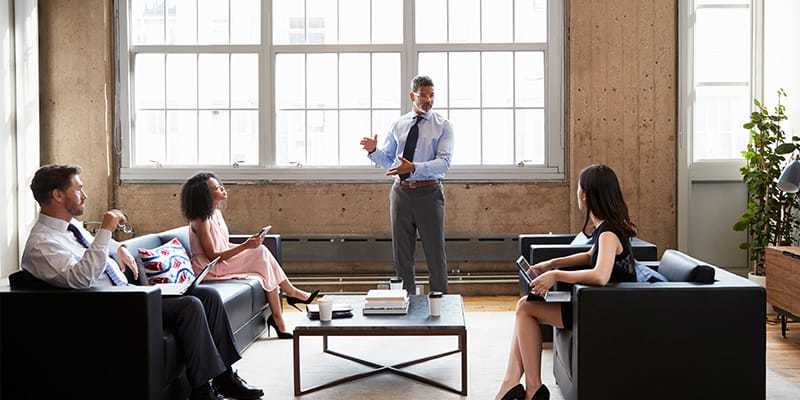 This article explains the four factor theory of leadership in a practical way. After reading, you’ll understand the basics of this powerful leadership theory.

What is the Four Factor Theory of Leadership?

The four theory of leadership is a classic leadership model that includes four basic dimensions of effective leadership. The four factors are: support, interaction facilitation, goal emphasis, and work facilitation. The insights into leadership yielded by the model can be used effectively both for leadership development and as a starting point for analysing organisational efficacy.

Leaders play a large, often crucial role within the organisation. Hence, every organisation would love to have an effective leader at the wheel, but as with all resources, effective leadership is scarce. A leader can, however, develop their basic functions, such as supporting staff during complex activities, facilitating interaction and work, and goal emphasis. Goal emphasis especially is an important factor for measuring organisational efficacy.

The four factor theory of leadership was developed in 1966 by Dr David Bowers and Dr Stanley Seashore. They studied people in leadership positions in forty offices around the United States. Over the years, the model was developed into a reliable predictor of organisational efficacy, and it is still used for that purpose regularly.

Becoming and remaining a successful and effective leader is not easy. There are various theories about leadership and its best practices, such as theory X & Y, transformational leadership, and strengths-based leadership. Many of these theories are focused on various leadership styles. The four factor theory of leadership approaches leadership in general from four different dimensions. 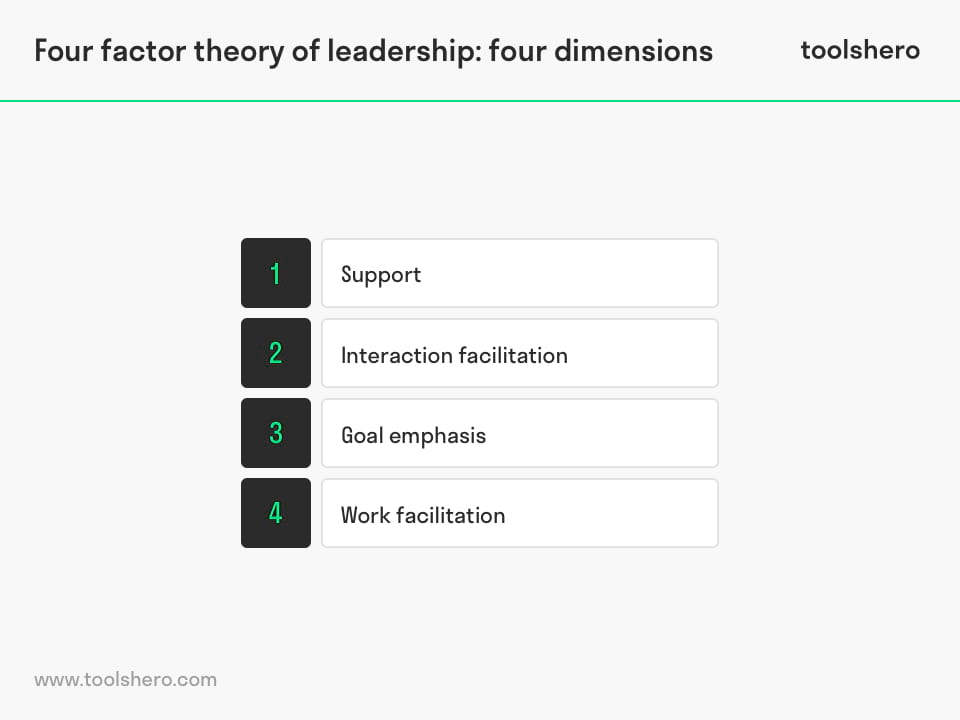 In the four factor theory of leadership, support is the first factor defined by Bowers and Seashore. Support, in the context of leadership, refers to a certain way of acting. According to the theory, this means acting in such a way as to increase feelings of value and self-esteem in surrounding others.

According to the authors, it’s important for a leader to support colleagues in order to motivate direct, open, and honest communication within the organisation. This enhances employee morale.

Effective leadership is largely based in support. Research showed that organisations who did not employ supportive leaders, even though they had more active leadership, had lower employee morale and low worker satisfaction at the same time.

Interaction facilitation is the second factor in the four factor theory of leadership. This factor measures how effective a leader is in stimulating an open communication culture in which sustainable relationships are built.

Organisations with leaders who are skilled at this are better able to predict efficiency, especially when they are organisations with a product or service that passes through many hands before it is delivered to the consumer. It also ensures all of these parties are fully up to date on all the developments and features of the product or the service.

The third factor in Bower and Seashore’s four factor theory of leadership is goal emphasis. What they mean by this is the extent to which leaders emphasise goals, and how effective they are in arousing and stimulating employees to achieve these goals, both individually and on the level of the organisation.

Goal emphasis can also be seen as a general leadership quality that ensures employees will work on shared goals in an organised way, rather than just working to make a living. Organisations whose leaders emphasise goals can predict profit margins based on the amount of emphasis that is put on stimulating goals.

The fourth and last of Bowers and Seashore’s four factors of leadership is work facilitation. A leader who is skilled at work facilitation shows it by prioritising what the team needs and by helping them make an efficient planning.

It’s not enough to simply pass on enthusiasm. The leader should also actually contribute to achieving goals in a practical way.

The impact of worker satisfaction on performance

Worker satisfaction appears several times in the four factor theory of leadership. The reason for this is evident. Worker satisfaction, it turns out, has a strong impact on the performance of the organisation as a whole in several ways.

Worker satisfaction can be achieved in multiple ways. For example, managers could work together closely with employees, actively developing and improving them.

Employees could also be given more authority and more of a say over the work that is carried out. This ensures that employees are challenged, which benefits their engagement and commitment. A clear image of how worker satisfaction positively influences productivity will help organisations get started to actively keep satisfaction high.

A satisfied employee will call in sick less often. Being away from work, time in which employees are not working while they should be, costs the organisation money, as well as influencing the performance of other employees.

A satisfied employee who has been working for an organisation for a long period of time and is rarely absent ensures there is no need for other employees to cover for this employee during their absence.

The four basic dimensions of effective leadership are support, interaction facilitation, goal emphasis and work facilitation. They were developed by Dr David Bowers in 1966 and are still used in the present day to predict organisational efficacy.

The organisation should be studied along four dimensions: support, interaction facilitation, goal emphasis, and work facilitation. These dimensions of the four factor theory of leadership can be used to tailor leadership development.

Another area in which leaders can make a crucial difference is worker satisfaction. A satisfied employee will be more successful and more effective than an unhappy colleague, so it is in the leader’s interest to keep everyone satisfied.

This may be realised in several ways. For example, the management could work together closely with employees, or more responsibility could be given to employees who did not have it previously.

What do you think? Do you recognise the explanation about the four factor theory of leadership? Can you apply the information from this article in your leadership position? Do you see similarities with other classical leadership theories? If so, which ones? Do you have any tips or additional comments?

How to cite this article:
Janse, B. (2019). Four Factor Theory of Leadership. Retrieved [insert date] from toolshero: https://www.toolshero.com/leadership/four-factor-theory-of-leadership/

Add a link to this page on your website:
<a href=”https://www.toolshero.com/leadership/four-factor-theory-of-leadership/”>toolshero: Four Factor Theory of Leadership</a>