What is the EisenHower Matrix?

The Eisenhower Matrix, also known as Urgent Important Matrix or the Eisenhower Decision Matrix, is a frequently used model for time management. On the one hand, it compares urgency, and on the other importance of assignments and helps to set priorities.

The Eisenhower Matrix model was designed by Dwight D. Eisenhower, the 34th president of the United States. Eisenhower also served as Supreme Commander of the Allied forces during World War II and later led NATO.

During his career, he frequently had to take many difficult decisions; everything was urgent and important. He wondered what urgency meant exactly and reached the conclusion that if it didn’t need to be done to day, it wasn’t urgent. Pressing matters take precedence, but if they can wait until tomorrow, they’re no longer urgent.

In addition, he dealt with tasks that were all equally important. He also asked himself if it was important that he complete the task personally, or if someone else could carry it out just as well. If the latter turned out to be the case, he no longer considered the task to be ‘important’. The quote ‘what is important is seldom urgent and what is urgent is seldom important’ shows Eisenhower ‘s thinking on the matter.

The Eisenhower Matrix consists of four quadrants; do (important – urgent), schedule (important – not urgent), delegate (not important – urgent), and eliminate (not important – not urgent). By determining if a task or assignment belongs in one of these quadrants, it becomes easier to prioritise, hand over tasks or delegating to another or including it in a schedule. At first glance, it seems that most tasks need to be carried out right away, but by carefully looking at the layout of the quadrants, you soon discover that nothing could be further from the truth.

The Eisenhower Matrix helps to distinguish between tasks that have to be carried out right away and tasks that can be dealt with at a later time or can even be ignored completely. 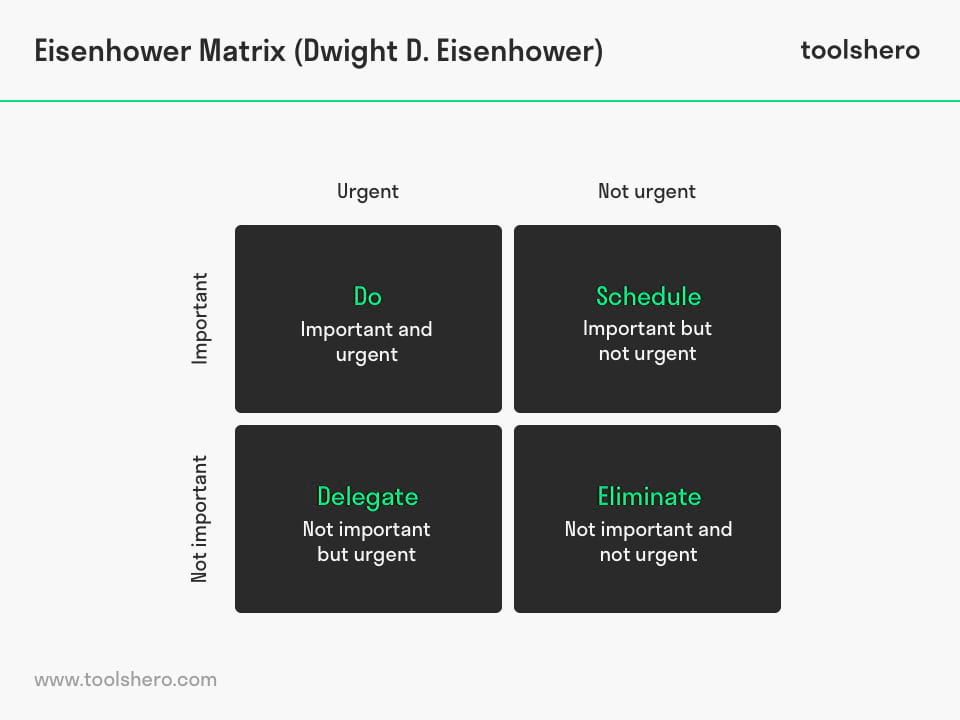 This quadrant of the EisenHower Matrix is also called the stress quadrant. That’s because all the tasks in that quadrant can lead to stress. But tasks from quadrant 2 and 3 can also move to the first quadrant as a result of poor delegating or poor planning, leading to a shortage of time and subsequently stress. The tasks in this quadrant need to be completed as quickly as possible today.

In this quadrant, you ask yourself if the task has to be carried out by you personally. Is it important that you do it, are you ultimately responsible and are their potential sanctions if you don’t carry them out? If the answer to that question is an unequivocal ‘yes’, then the task is important.

Next, you ask if the task really needs to be done today, within a few hours, or if the task can possibly be postponed to tomorrow or later in the week. If the task has to be carried out within several hours, then the answer is ‘yes’, meaning the task is urgent.

We’ll use a regional hospital for this example. The hospital regularly handles accident and emergency patients transported by ambulance who need care quickly. If an urgent case comes in with a patient with acute appendicitis, then the urgency to operate is very high. The hospital has free operating rooms and there is a team of surgeons on site. Unquestionably, the operation will have to be performed in the (very) near future, and it’s a task that belongs in quadrant 1.

In this quadrant of the EisenHower Matrix, you again ask yourself the question if the task can only be carried out by you personally. In that, it’s no different from quadrant 1. Urgency is once again about whether the task has to be done today and within the next few hours.

If it turns out that postponing is an option, a schedule will follow and it would be unwise to pay attention to this task today. If you do, you’ll run into issues with the tasks that were already in the first quadrant.

This example uses the same regional hospital as that of the first quadrant of the Eisenhower Matrix. This hospital has a specialist plastic surgery team, whose procedures include blepharoplasty. The hospital has invested in this team and business is going well, as there are a lot of people requesting this minor surgical procedure.

Usually these are patients who find it very inconvenient to have heavy eyelids, and want to have them corrected. It is it important for the hospital to carry out these procedures themselves? The answer is ‘yes’. But does it have to happen today? The answer to the question of urgency is ‘no’. Tasks in quadrant 2 have to be included in a schedule. The patients will be put on a waiting list and it won’t be their turn for several days or weeks.

There is a danger lurking in the case of the second quadrant, however. If a schedule is made, but nobody sticks to it, it’s doomed to failure. Scheduling is not postponing; it’s an agreement you make with yourself and your surroundings to carry out tasks in order of priority.

In this quadrant of the EisenHower Matrix, you once again ask the question if the task that has to be carried out, really is part of your responsibilities. If it can also be carried out by others, the task isn’t that important to you. If it turns out that the task cannot wait until tomorrow, but has to be addressed and carried out today, the urgency is high.

We continue with our example of a regional hospital. There is another case of a patient with acute appendicitis who is rushed to the hospital. It’s clear that it’s an urgent matter, however, there currently is no operating room available in the hospital. As a result, people are making urgent calls to ask nearby hospitals who can perform surgery on the patient right away. In this case, the matter is handed over (delegated) to someone else.

This is often the most challenging quadrant when it comes to time management. It comes down to assertiveness. To what extent are you able to say ‘no’, to not let yourself be led by what say you ‘have to’ do and to look for alternative solutions. By explaining properly that you’re short on time and perhaps need to leave the decision as to what task someone wants you to carry out to him or her, you make clear that you simply don’t have any more time.

This quadrant of the EisenHower Matrix is home to the tasks that don’t directly fall under someone’s responsibility and don’t have to be carried out today either. It’s also called the escape quadrant.

In most cases, the problems in this quadrant solve themselves or can be scheduled of the long term. Durch Einfach Liegen Lassen Erledigen (DELLE) is a phrase that really applies to this quadrant; ‘leave it, it’ll solve itself.’

We’ll continue with the regional hospital for this last example. An annual patient satisfaction survey is somewhat important for the hospital. The hospital doesn’t have to conduct the survey themselves; they hire a company to do it for them, meaning they delegate the task. The survey definitely doesn’t have to be done today or tomorrow. It can easily be scheduled for later in the year.

In practice, many superfluous tasks end up in this quadrant. Emails that are cc’ed to people are a good example of this. People often think that cc’ed emails actually need to be read, but the opposite is true. It’s a way to create evidence and it’s just a waste of time to read through everything and follow up on things that are actually intended for the recipient. 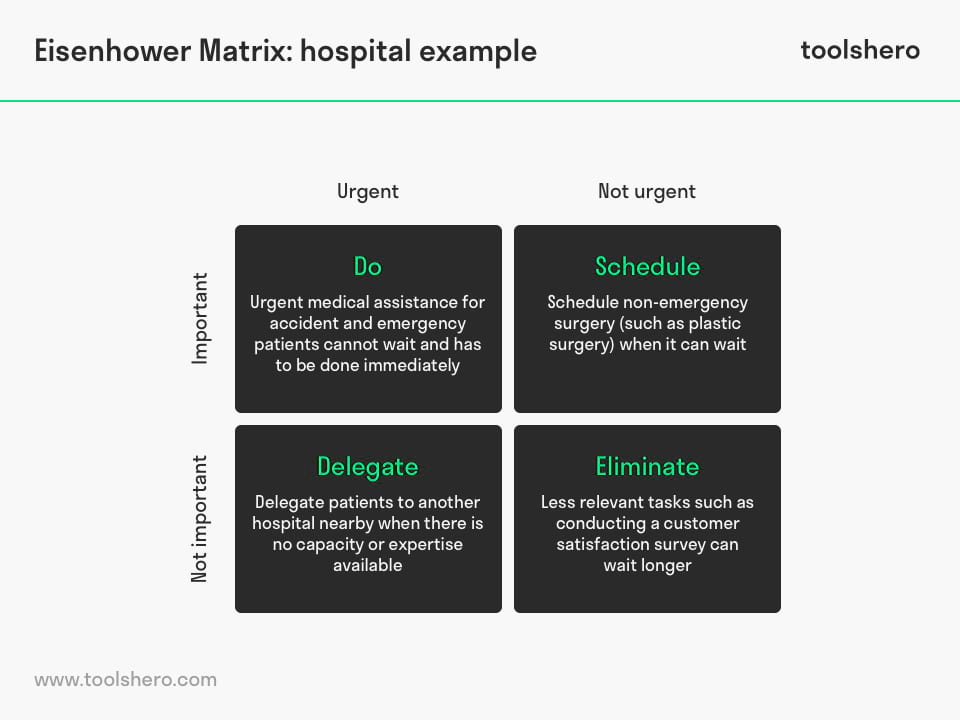 Planning is a particularly important factor in the second quadrant of the EisenHower Matrix. It’s worth it to create clear task lists based on an honest and concrete time indication. Fooling yourself by thinking that a task that will take two hours can be done in 30 minutes, really isn’t helpful.

By dividing a large job into subtasks, they become simpler to work on and it becomes easier to meet deadlines. Working with these so-called To-Do Lists makes it clear what has been done during a day. This stimulates and motivates to begin the next working day with renewed courage. By dividing tasks into these four quadrants of the EisenHower Matrix, it becomes easier to prioritise and to really know if tasks can be delegated or ignored.

This Eisenhower Matrix template helps you to manage time. Start listing which tasks have to be carried out right away, which tasks can be dealt with at a later time or which can even be ignored completely.

What do you think? Is the Eisenhower Matrix applicable in your daily work? Do you recognize the practical explanation or do you have more suggestions? What are your success factors for deciding whether a task is urgent and/or important?

Add a link to this page on your website:
<a href=”https://www.toolshero.com/personal-development/eisenhower-matrix/”>toolshero: Eisenhower Matrix</a>